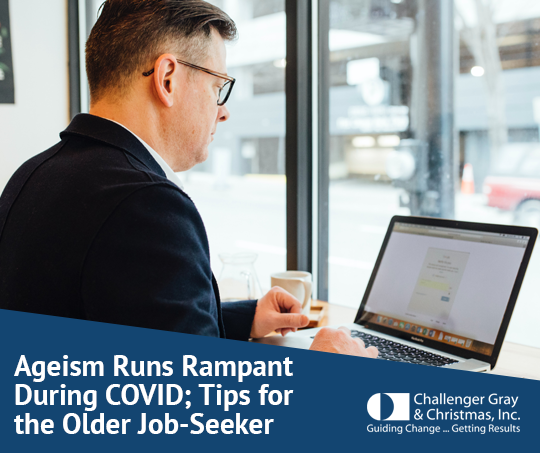 Racial and gender discrimination are rightfully under examination at many workplaces, as employers strive for diversity in hiring. However, another bias is impacting companies as well: ageism. Job seekers of every age are encountering obstacles due to the pandemic, and more seasoned professionals, those over the age of 50, are not immune, according to one workplace authority.

“The traditional retirement age is a thing of the past. Many older workers, whether driven by the desire to work or the need for health care coverage, opt to stay in the labor force. Job seekers in this age bracket run into biases that keep them from landing positions for which they are not only qualified, but in which they would greatly benefit the company,” said Andrew Challenger, Senior Vice President of global outplacement and executive coaching firm Challenger, Gray & Christmas, Inc.

There are about 73 million Baby Boomers in the U.S. – people born between 1946 and 1964, who are now between the ages of 56 and 74. According to the Bureau of Labor Statistics, 20% of Americans over the age of 65 were employed or actively looking for employment in 2019. Two decades earlier, it was less than 12%.

According to The New School’s Retirement Equity Lab, nearly 5 million older workers lost their jobs between March and June. Many may never return to the working world – 2.4 million left the labor force entirely (which is 7% of all workers ages 55-70). The National Bureau of Economic Research reports that the youngest workers (21 to 30 years old) and the oldest (over 60) saw the largest employment declines in the first two months of the recession.

“Job opportunities have dried up, just as they have for all workers. Plus, older people face the added disadvantage that they are more at risk for severe illness should they contract COVID-19, so they are voluntarily not going to work if it is too risky,” said Challenger.

“This can be economically devastating for members of this group. It can lead to financial hardship for many, forcing older people to begin receiving Social Security benefits earlier or depleting savings, 401(k)s, and/or IRAs,” he added.