We Are All Discussing Game of Thrones at Work; It Could Cost $3.3B 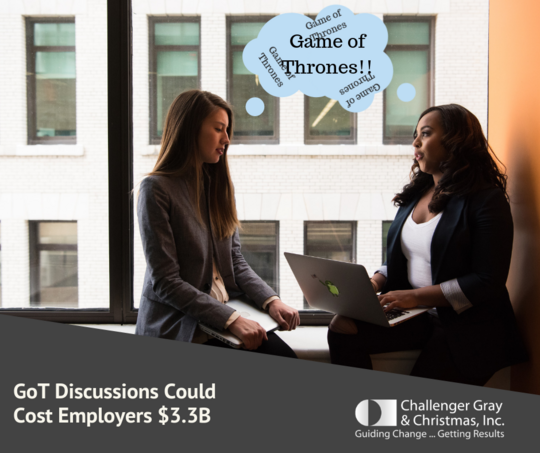 **Note: It's not even close to the largest productivity-sapper.**

The HBO hit series Game of Thrones is the talk of virtually every workplace. Co-workers are not only discussing plot points and battle scenes, but also engaging in office pools on which major characters will survive each episode of the final season. All this banter is bound to cause lapses in productivity, possibly to the tune of over $3 billion, according to an estimate from global outplacement and business and executive coaching firm Challenger, Gray & Christmas, Inc.

Each episode of the previous season, Season 7, averaged 32.8 million viewers, according to Nielsen tracking. With the record 17.4 billion viewers who tuned in for the Season 8 premier, those numbers are likely to be comparable this season.

Applying the current employment-to-population ratio of 60.6% to those average weekly viewers, that is 19,876,800 employed viewers. Meanwhile, the average hourly wage for non-farm payrolls is $27.77 as of April 2019, according to the Bureau of Labor Statistics (BLS).

With 19.9 million workers multiplied by $27.77, $552 million per hour is wasted on discussing the most recent episode. Multiply that over the six episodes of the final season and the cost to employers comes to $3.31 billion in lost productivity.

"The cultural phenomenon that is Game of Thrones is another opportunity for employers to build camaraderie in the office. Bosses shouldn't try to stifle these discussions in the least. In fact, it's likely they are just as enthusiastically participating in them as their employees," said Andrew Challenger, Vice President of Challenger, Gray & Christmas, Inc.

However, these Game of Thrones discussions are not the most expensive to employers, according to Challenger estimates. Below are the most high-profile productivity sappers: