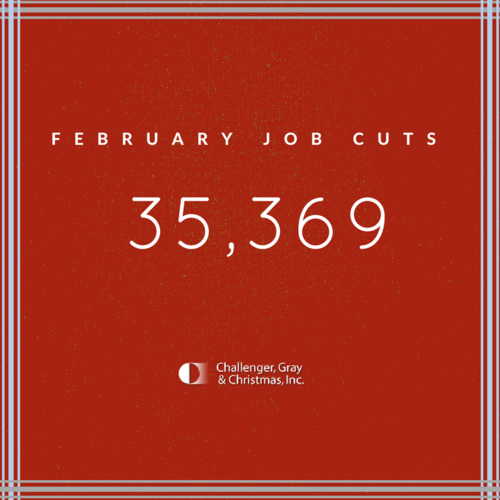 The nation’s employers announced plans to cut 35,369 jobs in February, down 20 percent from the 44,653 cuts announced in January, according to a report released Thursday by global outplacement and executive coaching firm Challenger, Gray & Christmas, Inc.

“The economy is almost at full employment, and companies are holding on to their workforces. Announced job cuts have been below 50,000 a month for the last 22 months. That’s the longest streak in our tracking,” said John Challenger, Chief Executive Officer of Challenger, Gray & Christmas, Inc.

In fact, the last longest streak of monthly job cuts under 50,000 was for 13 months beginning February 1996 through February 1997.

Retail leads all sectors in job cuts so far this year, with 21,484, 6,106 of which were announced in February. Health Care/Products follows with 10,392 in the first two months of the year, while the Consumer Products sector has announced 10,320.

“President Trump’s proposed new tariffs on steel and aluminum may spell more jobs in those industries in the short term. However, with automation dominating those industries, the tariffs will more likely cause companies that manufacture using those products, such as automotive and aerospace, to cut jobs,” said Challenger.