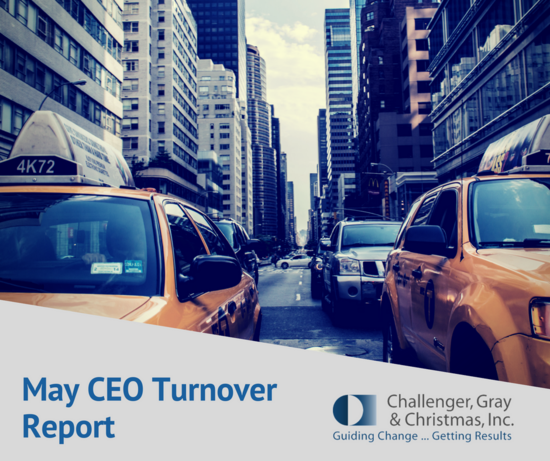 A total of 91 Chief Executive Officers of U.S.-based companies left their posts in May, down 16.5 percent from the 109 CEO exits in April, according to a report released Wednesday by global outplacement consultancy and executive coaching firm Challenger, Gray & Christmas, Inc.

May’s total is 13.8 percent higher than the 80 CEOs who left their posts in the same month last year. So far this year, 541 CEO exits have occurred, up 14.6 percent from the 472 CEO changes tracked in the first five months of last year.

“Despite the drop in May, we’ve continued to see an overall rise in leadership changes at the highest level,” said Andrew Challenger, Vice President of Challenger, Gray & Christmas, Inc.

“Companies are adapting to a tight labor market and uncertainty due to proposed tariffs and potential new legislation,” added Challenger.

The Government/Non-Profit sector leads all industries in departures with 109, 22 of which occurred in May.
Computer companies announced 69 exits so far this year, 103 percent more than the 34 announced through this point last year.

“As consumers turn their attention to data privacy, tech firms are replacing leadership to meet those demands,” said Challenger.

In fact, in May, WhatsApp founder Jan Koum announced his departure in light of the Facebook privacy scandal.

Meanwhile, Health Care/Products firms have announced 51 CEO exits in 2018, including six in May. Financial companies reported 48 through the year.

Most CEOs, 166, retired this year, including 34 in May. Another 153 have stepped down into other positions within the company, usually as a Board Member or other C-Level executive. Sixty-nine resigned from their positions, while 47 found new positions.

California companies saw the highest number of CEO changes this year with 60, 11 of which occurred in May. Companies in Texas have reported 54 this year, while Florida and New York each saw 28 CEO changes.