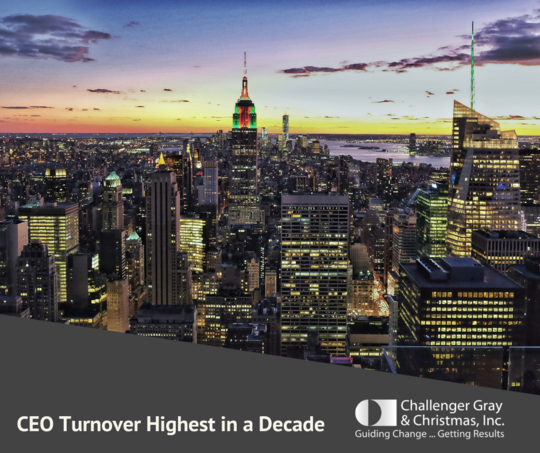 “CEOs are leaving their posts at a pace we haven’t seen in a decade. While current economic conditions are quite different from 2008, fluctuating markets, uncertainty with trade, and investor concerns may be causing companies to put leadership in place to head off a coming downturn,” said Andrew Challenger, Vice President of Challenger, Gray & Christmas, Inc.

CEO changes are the highest since 2008, when 1,361 CEOs left their posts through November.

“Meanwhile, a number of industries are undergoing serious disruptions due to shifting consumer behavior. Companies in Finance, Tech, Retail, and Manufacturing are finding that changes need to be made at the top in order to respond fully to these shifts,” he added.

"We’ve also seen a number of CEOs removed from their companies due to inappropriate behavior or conduct in violation of companies’ codes of ethics.

“In light of the #MeToo movement, companies are not taking any chances with leaders who engage in these kinds of activities. It not only harms companies’ brands and reputations, it very much impacts current employees, productivity, work environment, and culture,” said Challenger.

In fact, two CEOs were removed last month due to their involvement with sexual harassment allegations. Another two left due to professional misconduct that violated the companies’ ethics. So far this year, eight CEOs have left their posts due to sexual misconduct allegations.

The majority of CEOs (358) have retired this year, while 255 resigned. Another 337 stepped down into other roles within the company, usually as a Board Chair or other C-Level executive.

Twenty-one CEOs were terminated by their Boards, while ten left amid scandal this year.
Another 129 found new positions in other companies.

The Government/Non-Profit sector leads all industries in CEO turnover this year, with 258 departures, 33 of which occurred in November. The Computer sector follows, with 138. Companies in this sector include software and web developers as well as companies that make hardware for personal computers.