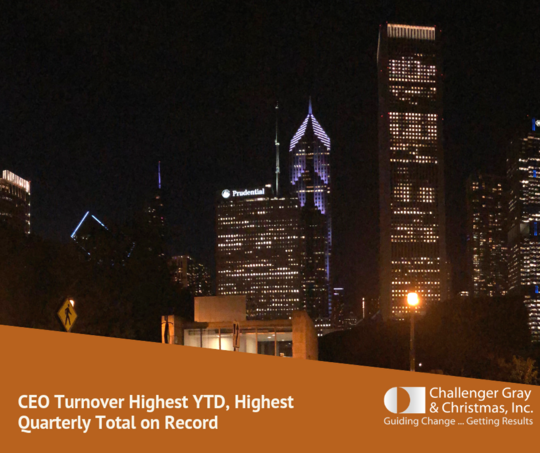 At this point during the Great Recession in 2008, the second-highest year for CEO turnover, 1,132 chief executives had announced exits, 2.5% lower than the current year-to-date total. 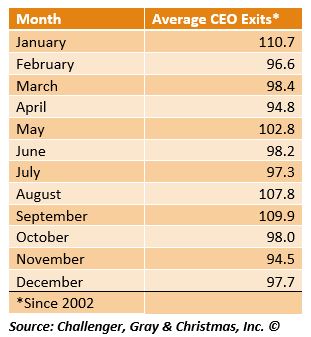 “Other factors are contributing to a high number of leadership changes as well. Companies that have done well are implementing succession plans that have long been in place. Others are finding that regulatory uncertainty and new technologies changing how companies do business require leaders who can specifically address these issues,” said Challenger.

In fact, last month, vape device maker Juul replaced its CEO with a tobacco executive to combat the growing backlash against its product, including marketing practices allegedly aimed at children. The Centers for Disease Control & Prevention (CDC) reported 1,080 lung illnesses as well as 18 deaths as of October 1 due to vaping products or e-cigarettes. Not all are due to Juul’s product.

Companies in the Government/Non-Profit sector continue to lead all sectors in CEO exits with 246, 84 of which occurred in the third quarter. That is up 25% from the 67 who left their posts in the second quarter of this year.

“In some cases, government entities are grappling with regulatory changes that influence what the leaders of these organizations can accomplish. Similarly with non-profits, CEOs often need to work with government officials for funding. In other cases, CEOs are stepping down into other roles, typically to fundraise, and new leadership is being appointed,” said Challenger.

The Technology sector announced the second-highest number of CEO changes this year with 154, 159 when including CEO exits from the Telecommunications and Electronics industries. That is up 21% from the 131 CEOs who left their posts in those three industries through September last year.

Industrial Goods manufacturers have announced 50 CEO changes in 2019, 108% higher than the 24 announced through the first eight months of 2018.

Meanwhile, Energy companies announced 46 CEO changes this year, up 109% from the 22 CEOs who left their posts in this industry through August last year.

Companies are holding on to their institutional knowledge. Through September, 438 chief executives, or 38%, stepped down into other positions within their company, usually as a Chairperson or other member of the C-Suite. Another 292 have retired from the CEO role, while 103 found new positions in other companies.