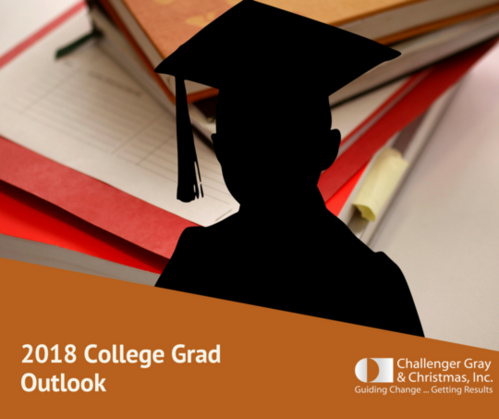 With a tight labor market and skills shortages impacting a number of industries, the nation’s employers are sure to embrace the nearly 3 million students who will graduate with bachelor’s or associate’s degrees this May. The issue will be whether college grads have the requisite skills for the jobs available, according to the annual College Grad Outlook by global outplacement and executive coaching firm Challenger, Gray & Christmas, Inc.

“Economic conditions are driving growth in many sectors, necessitating an increase in hiring. At the same time, companies are benefitting from new tax legislation and are able to invest in hiring and training, especially at the entry level,” said Andrew Challenger, Vice President of Challenger, Gray & Christmas, Inc.

The Michigan State survey also found that respondents in construction, finance and insurance, services, manufacturing, mining and oil production, professional, business and scientific services, transportation, and wholesale trade, among others, cited growth as the main reason spurring college grad hiring in those industries this year. Many of these sectors are also experiencing a skills gap.

Currently, labor shortages are impacting skilled trades, construction, manufacturing, scientific and related fields, and health care. According to a study by Deloitte, 3.5 million jobs are expected to be created in manufacturing, but only 1.5 million will be filled due to skills shortages. These industries are in need of engineers, MBAs, and science, technology, engineering, and math (STEM) majors.

“STEM graduates may not think of construction or manufacturing as potential career paths while they’re earning their degrees, but companies in these industries are in desperate need of talent and are recruiting heavily,” said Challenger.

In fact, for bachelor’s degree earners, manufacturing companies are offering an average starting salary over $53,000 per year, the highest of the major industry groups reporting, according to the Michigan State study. That number increases to over $60,000 when the degree is technical.

STEM majors topped the list of highest starting salaries, according to the Michigan State study, averaging nearly or over $60,000. The list included engineers, software developers, and information systems professionals.

Other areas of growth for college grads include agriculture and related businesses, finance, insurance, scientific research, and transportation.

“While the outlook is bright for those who sought degrees in STEM fields, it is common for many students to start in a STEM major and switch out at some point in their college careers. Those students are still entering a welcoming job market,” said Challenger.

According to the U.S. Department of Education, students in STEM programs were more likely than those in non-STEM fields to change majors. Students who started out studying math were likeliest of all to change fields of study: 52 percent of those who initially declared as math majors ended up majoring in something else, followed by 40 percent of those in natural sciences, 37 percent in education, 36 percent in humanities disciplines, and 32 percent in engineering and general studies.

For those who did not study STEM, employers are very much interested in the soft skills that are cultivated in liberal arts or business degree programs. In fact, the Michigan State study found a lack of soft skills was a serious concern for hiring companies.

Even for those with high technical proficiency, soft skills are key to nailing the interview and landing a position. These soft skills include enthusiasm, drive, creativity, critical thinking ability, initiative, and oral and written communication skills. To prove themselves as sustainable producers, candidates must show both business and emotional intelligence.

“Hiring managers not only look for qualified candidates, they also want happy, likeable co-workers. Recruiters are looking for how well you will be able to establish a rapport with potential co-workers as well as confident, assertive, and concise speakers. Demonstrating leadership skills and the ability to construct dynamic teams is more important now than ever to proving your long-term value,” said Challenger.