Companies Announce Over 600 Job Cuts Due to Covid-19; 28 Companies Take Action on the Virus 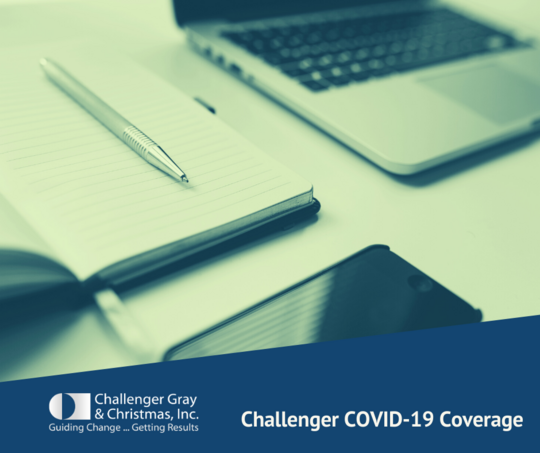 "We are indeed seeing job cuts from companies that are grappling with Supply Shock. The Port of Los Angeles cut 145 drivers after shipments from China stalled, and a toy maker cut 18 jobs due to a work stoppage in China," said Andrew Challenger, Senior VP of Challenger, Gray & Christmas, Inc.

"Meanwhile, cancelled events in the US contributed to 300 job cuts. We also tracked cuts announced by an energy company that blamed not only the outbreak, but also the tightening oil sector.

"Circuit breakers on the major exchanges have been triggered twice, and the Dow is currently down 1,700 points. These will not be the last job cuts we see from this outbreak," he added.

Companies Take Action to Promote Social Distancing. According to Challenger tracking, 28 companies have publicly taken some sort of action due to the COVID-19 outbreak. Sixteen companies have offered their workers remote work options, and three others are testing the possibility.

"The vast majority of companies that offered this option, especially early in the month, were technology companies that, in most cases, already offer remote work and are equipped to handle it company-wide," said Challenger.

Indeed, of the 16 companies offering remote work, 12 are technology companies. Two firms are in Government, including NASA's Ames Research center which prohibited workers in the facility after a confirmed case.

Another four companies changed their policies to offer sick leave to their hourly workers, including Darden Restaurants, a first in the industry.

Fourteen companies are taking action out of an abundance of caution, while five have seen confirmed cases. Two others are acting on possible exposure.

Challenger will continue to update this data as it becomes available.