July CEO turnover report numbers are up; total number of departures still below 2019 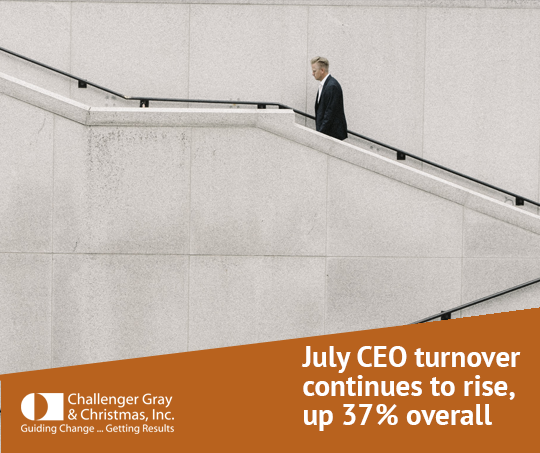 Chief Executive Officer turnover rose to 125 in July, up 37% from the 91 exits reported in June, according to a report released Wednesday by global outplacement and business and executive coaching firm Challenger, Gray & Christmas, Inc.

“For new people taking on the CEO role, it can be a completely novel experience, even for a seasoned C-Suite executive. Many employees continue to work from home, so the only way for a CEO to meet his or her new staff, even the top executives, is virtually. The entire CEO hiring process may have taken place remotely. Additionally, new CEOs may be leading companies from their homes for some time to come.”

Last month’s total was led by the Government/Non-Profit sector, which saw 28 chief executive replacements in July, for a total of 148 so far this year, leading all sectors in CEO turnover. Entities in this sector include charities, foundations, and government-run organizations, such as transportation authorities or public education. That is a 21% decrease from the 188 CEO changes in that sector tracked through the same period last year. In June, 22 Government/Non-Profit CEOs exited their positions.

The second-highest number of CEO exits for July was in the Health Care/Products sector, with 18 changes in the top position. This is a 64% increase over the 11 reported in that sector in June. So far this year, 78 CEOs have left in that sector, nearly the same as the 75 who did so between January and July 2019.

Racism has forced four companies to make a change in their top position so far this year. In June, three CEOs left due to racism – one so a person of color would replace him, one for making racist comments, and one due to allegations of racism. Another CEO stepped down in July because of racism.

“More and more companies are realizing the harm that toxic work environments can have on employees and productivity. There is no tolerance for bad behavior in the workplace, especially in the top positions, thanks in part to movements such as Black Lives Matter and #MeToo. Many companies are stepping up and trying to address the systemic problems that have been put up with for far too long,” said Challenger.

Of those who gave a reason for leaving their position, the majority of CEOs (35) who left their positions in July stepped down, followed by 23 who retired and 16 who left to pursue new opportunities. The average age of the CEOs leaving in July was 58 and they were in their positions for an average of 11.6 years.

Andrew Challenger, Challenger, Gray & Christmas SVP joins Yahoo Finance’s The First Trade with Alexis Christoforous and Brian Sozzi to discuss the spike in turnover of CEOs across all major sectors in the month of July. 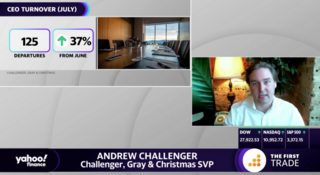