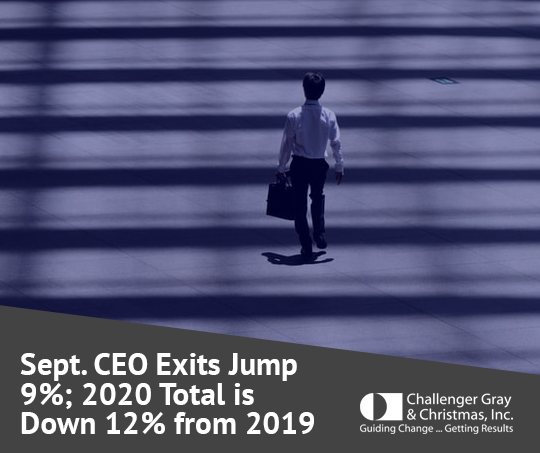 "The uncertainty in the second quarter about how COVID-19 would impact businesses left many CEOs in their positions. As the pandemic continued to last and grew stronger in the third quarter, we began to see companies announce changes intended to weather the storm,” said Andrew Challenger, Senior Vice President of Challenger, Gray & Christmas, Inc.

Government/Non-Profit sector CEOs announced the highest number of changes last month, with 20, bringing the year-to-date total to 185, a 24.8% decrease from the 246 CEOs who left their positions in this sector during the same period last year. This sector includes charities, foundations, and government-run entities, such as transportation authorities or public education.

The Technology sector saw the second-highest number of CEO changes in September with 16, for a total of 118 for the year. This is a 23.4% decrease from the 154 announced in this sector through September last year.

While CEO turnover is down this year over last year, 13 of the 30 sectors tracked by Challenger are seeing a higher number of CEO changes than in 2019. The Media industry, which has seen the highest number of job cuts for the industry through September on record according to Challenger, has announced 25 CEO changes this year, up from 19 in the first nine months of 2019.

Transportation, Health Care, Services, Chemicals, Automotive, and Entertainment/Leisure are some of the other industries seeing increases in CEO changes compared to last year.

“Despite the decline in the total number of CEO changes over last year, the industries that are seeing consumers and businesses hold back on spending are seeing an increase in leadership exits,” said Challenger.

Of those who gave a reason for leaving their position this year, the majority of CEOs (260) stepped down, meaning they stayed with the company for a period of time after leaving the position. Another 222 announced retirements and 103 saw their interim periods end. Some companies provided more specifics: 15 left due to a scandal (usually something that resulted in legal proceedings, such as financial mismanagement or fraud), seven left amid bankruptcy, and five left due to differences with the board.

Women are entering the CEO role at the highest rate since Challenger began tracking replacements by gender in 2010. Thus far, 24% of CEO replacements are women, up from 22% last year, and 23% in 2018. It is up significantly from the 12.4% of women CEO replacements in 2010.