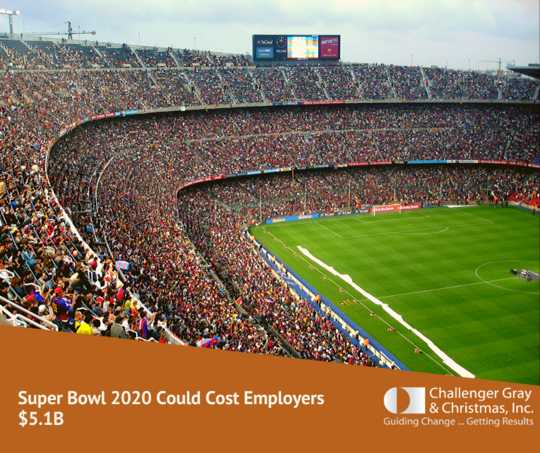 In fact, the Workforce Institute at Kronos survey found 67% of workers are happy New England is not in the Super Bowl this year.

The San Francisco 49ers have not appeared in the Super Bowl since 2013, when they lost to the Baltimore Ravens. The team has not won the Vince Lombardi Trophy since 1995, when they faced the San Diego Chargers.

Meanwhile, the Kansas City Chiefs have not appeared in the Super Bowl in 50 years, when they beat the Minnesota Vikings in Super Bowl IV.

Challenger used the Workforce Institute at Kronos figure of 17.5 million workers missing 6.86 hours of work on Monday, the average daily hours worked, according to the Bureau of Labor Statistics. Multiplying this by the average hourly wage of $28.32 in December 2019 results in $3.4 billion in lost productivity. Add the 11.1 million workers coming in one hour late or leaving one hour early, with the average hourly wage, and that figure increases to $3.7 billion.

Challenger also estimates that interested workers will spend at least ten minutes each day leading up to the Super Bowl discussing the game, managing office pools, and researching the two teams and their players. With roughly 98.2 million Americans tuning into the game, based on 2019 Nielsen ratings, and applying the employment-population ratio of 61%, 59.9 million Americans will likely discuss the game each day for an estimated loss of $1.4 billion over the five days leading up to the game.

“Over the years, calls have been made to make Super Bowl Monday a national holiday, which would give fans time to decompress after the big game. Others have called for the game to be played the Sunday before Presidents’ Day. This year, a young fan started a petition to move the game to Saturday,” said Challenger.

Frankie Ruggeri, a New York high-schooler, started a petition on Change.org to get the game moved to Saturday night. Over 57,000 people have signed as of Monday afternoon.

“Until this happens, if it ever does, employers should accept that people are going to spend some of their time the Monday after the Super Bowl discussing big plays, halftime performances, or the best commercials. Consider allowing employees to come in a bit later, encourage fans to bring in leftovers from their Super Bowl parties and throw a potluck during lunch, or allow workers to wear fan apparel. Use this opportunity to increase morale and encourage camaraderie,” he added.

While the losses may seem extreme, it likely will not impact any individual company or the economy as a whole in a significant way.

“Consumer spending around the Super Bowl, including snacks, drinks, party favors, and fan clothing, will help the economy more than the workers who spend part of their day or the entire day Monday discussing and recovering from the game will hurt it,” said Challenger.

In other words, employers lose an average of $4.72 per employee for every ten minutes of work time wasted discussing the Super Bowl, managing office pools, planning Super Bowl parties, etc.

5.1 billion to be lost in #productivity. Find out how the #SuperBowl will hinder more than it will help the #economy this year via @YahooFinance #economicnews #superbowlsunday #financehttps://t.co/OZYGJkdmHs