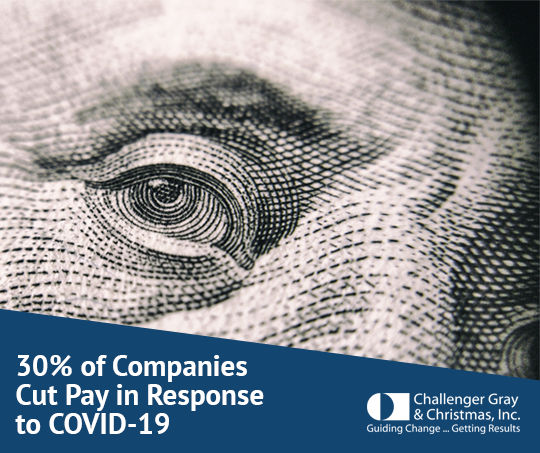 “It used to be that companies would do everything they could to avoid cutting pay. Now they try to avoid layoffs, which can hurt morale, lead to survivors’ guilt, and create anxiety, with employees wondering who will be next,” said Andrew Challenger, Senior Vice President of Challenger, Gray & Christmas, Inc.

“Pay cuts may have been a more attractive option than layoffs because many employers hope the pandemic will end sooner rather than later, so they don’t want to lose good workers they may desperately need in the near future. At the same time, working from home may have fewer costs for employees, such as avoiding commuting expenses, so pay cuts could be more easily tolerated,” he added.

In the same Challenger survey, 73% of respondents reported they plan to keep some or all of their employees working from home even after the pandemic passes. Interestingly, Facebook announced that within a decade it would transition half of the company’s 48,000 employees to remote work. However, if those employees lived in a location less expensive than Silicon Valley, they might get a pay cut.

Of those surveyed who have instituted pay cuts, 44% reported pay cuts across the board, while 34.22% said the cuts were for executive or senior-level employees only, and 11.11% for certain positions.

Several high-profile chief executives took zero pay or severely reduced pay at the onset of the pandemic in mid-to-late March and early April. For instance, Delta Air Lines’ CEO said he would cut his salary by 100% for six months, and Board Members would forgo their salaries for that same six-month period. Other CEOs at airlines took pay cuts of 10% to 25%.

GE’s CEO, Larry Culp, surrendered the remainder of his $2.5 million base salary amid job cuts, and the CEOs and executive teams of many hotel chains also took large pay cuts as the companies cut jobs.

“The move by chief executives to forgo their own pay during layoffs is largely symbolic. It’s hard to justify layoffs when the CEO is making 200 times the median salary,” he added.

In fact, according to a 2018 study by the Economic Policy Institute, the average CEO pay ratio was 271 to 1, using the average base salary of $58,000 for a typical American worker.

“Now, employers are grappling with when to reverse cuts. It will likely be different for every company. Giant firms may be able to navigate financial issues more quickly than mid-size or small companies,” said Challenger. 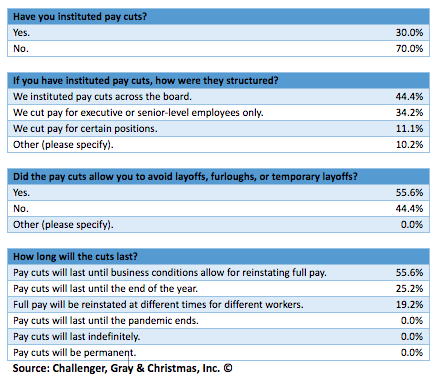