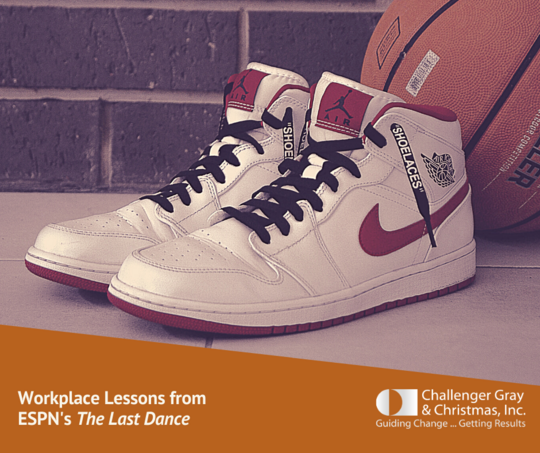 “Any organization strives to foster a collaborative culture and encourage growth and success. Employers are generally slow to dismantle teams that are performing at the highest level,” said Andrew Challenger, Senior Vice President of global outplacement and executive and business coaching firm Challenger, Gray & Christmas, Inc.

“While good companies should plan for the future, leaders need to recognize their talent. They need to reward and motivate their current high performers,” he added.

The series follows the meteoric rise of the Chicago Bulls, from Michael Jordan’s joining the team in 1984 to Jerry Krause assembling an all-star starting crew, including replacing coach Doug Collins with Phil Jackson in 1989. Scottie Pippen became Jordan’s number two, and Dennis Rodman eventually became the number three man. Supported by a cast of talented players, the Chicago Bulls won six championships between 1991 and 1998.

Under coach Phil Jackson, the offense went from a Jordan-centric one to a team-focused game, allowing for all players to contribute rather than relying on one star player. Even with more team-focused play, Jordan still emerged as the NBA League MVP five times in his career.

“The documentary highlights leadership that is able to recognize individual talents and how to accommodate the work styles of each member to bring forth the highest potential of the team,” said Challenger.

In the third episode, it becomes clear that Dennis Rodman had his very own unique work style, and given some space with encouraging support, he would perform optimally. When he asked for a vacation to Las Vegas during the 1998 season, Jackson and Jordan, though hesitant, accommodated his request. The team went on to win its sixth Championship that year.

While the series shows the best in leadership and teambuilding, it also shows how distrust with management and unfair compensation cause organizations to sour. During the height of the Bulls’ greatness in 1997 and 1998, General Manager Jerry Krause, with the backing of Owner Jerry Reinsdorf, put a clock on Phil Jackson’s coaching tenure, which led to star player Michael Jordan’s exit.

Meanwhile, Scottie Pippen, who himself was a seven-time All-Star, was disengaging from the organization after management’s failure to restructure his contract, which was one of the lowest paying for the league, despite his pivotal role in the organization.

“When workers begin to distrust management, it impacts morale across the organization and it becomes very difficult for leaders to regain that trust,” said Challenger.

Challenger offered the following tips on how the workplace can avoid “The Last Dance:”