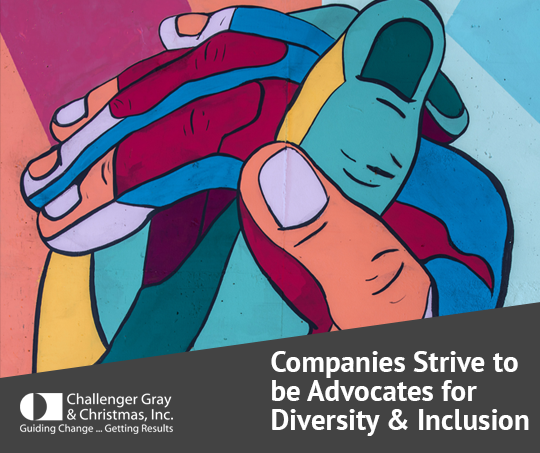 Companies are facing increased pressure to ensure they have a diverse workforce – in relation to age, race, religion, nationality, sexual orientation, gender, and physical conditions. There are several steps that may be taken by executives who are committed to diversity & inclusion, according to one workplace authority.

“Business executives who want to be advocates of diversity & inclusion have to go beyond simply reviewing policies or naming chief diversity officers, who have a history of high turnover often due to a lack of support for the initiatives they create,” said Andrew Challenger, Senior Vice President of global outplacement and executive and business coaching firm Challenger, Gray & Christmas, Inc.

Recent news stories bring the necessity to light: Allegations of racism and workplace intimidation have led to an internal investigation of The Ellen DeGeneres Show, despite the celebrity often promoting a “be kind” attitude on camera. In late July, Nike named a new Chief Diversity Officer, along with issuing a promise to improve diversity and speak out on social issues, according to The Wall Street Journal. The Black Lives Matter Movement against police brutality and racially motivated violence continues to grow, including organized protests across the U.S., while the #MeToo movement continues to uncover sexual harassment and violence.

“Companies have to make it clear to their employees, their customers and clients, and their communities that they will not tolerate injustice for any group,” said Challenger. “Being allies to groups that have been marginalized and promoting equality in their workplaces will help companies attract the most talented, diverse workforce. If companies want to be truly innovative, diversity is essential. Plus, their brand will be associated with trying to right the wrongs of the past.”