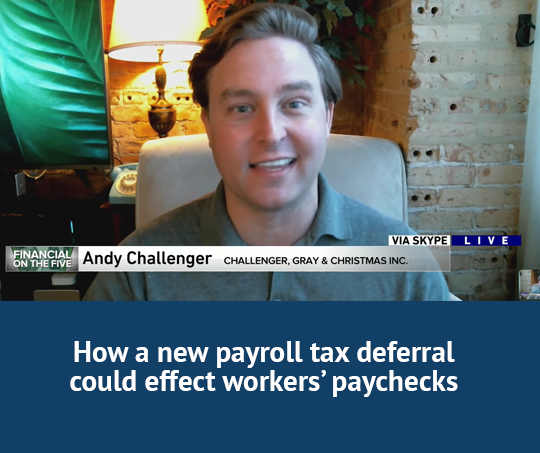 A controversial payroll tax deferral for workers implemented by the Trump administration took effect Tuesday (September 1, 2020), and could impact workers’ paychecks now and at the beginning of the year. Andy Challenger from Challenger, Gray and Christmas explains the new policy on WGN Chicago.

ELWOOD: It took effect yesterday and could affect the workers paychecks now and at the beginning of the year. Andy Challenger from Challenger, Gray, & Christmas, Inc. is here to explain the new policy. Andy, let's start with that basic premise. Why do some people consider this to be controversial?

CHALLENGER: I think in some people's minds that this is being talked about as a ‘tax cut’, but it's very specifically a ‘tax deferral’ so if your employer allows you to participate in this tax holiday, you would be a saving a certain amount of money - about 6% of each paycheck that's normally paid into social security - for the next 4 months through the end of the year. However, you do have to pay that money back. Starting January first and through April you have to be basically double taxed for those months so that at the end of the day no extra money is going out the door.

DUARTE: So for people may see it as a freebie, explain how it could hurt them come January one. That money starts being pulled out of their paycheck, what impact could that have on the economy?

CHALLENGER: The hope is that if people have extra money in their pockets for the next 4 months they’ll go out and spend it and they’ll stimulate the economy - the opposite is almost certainly true if they have less money for the first 4 months of next year that's going to be a drain on the economy and there is some real controversy whether that is a worthwhile trade, especially with all the administrative cost that each employer is going to have hold onto if they decide to implement this tax holiday.

ELWOOD: A couple of questions: can you decide not to accept that and then who and what income bracket is actually affected by this?

CHALLENGER: It’s only going to be people that are making under $104,000 a year that are eligible, but eligibility is completely also dependent on whether your employer decides to participate. If they decide to participate they may force all employees to participate in the tax holiday they may provide an option to each employee, but I think overall most employers are probably not going to participate at all, because at this point in time there is no penalty if you decide to opt out.

DUARTE: What are you noticing right now as you talk to employers and what would you recommend if you want to weigh in on what should be done or what they should do.

CHALLENGER: Yeah I think most employers are looking at this as a complicated administrative procedure also with some employee relations a potential liability so i think a lot are not going to provide this option if they do - if you're an employee with the choice to opt in, you could see it as an interest free loan but make sure you're holding on to that money because you are going to the pay it back.

CHALLENGER: Thank you for having me.