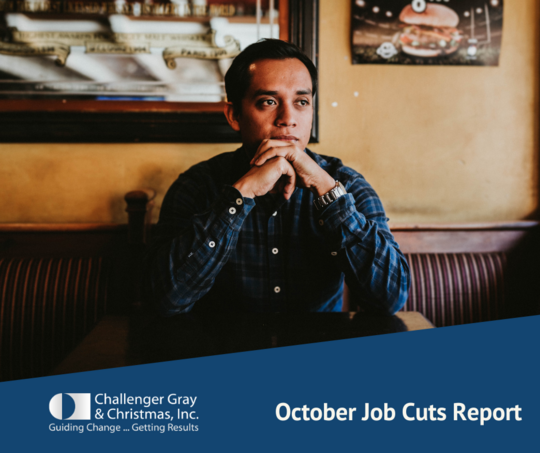 “The bulk of the announcements this year are indeed in industries directly impacted by shutdown orders and consumers’ wariness to spend money in such places, like restaurants, hotels, bars, and brick-and-mortar retail. We’ve now seen tens of thousands of cuts in industries outside Entertainment and Retail, indicating the impact is spreading,” said Andrew Challenger, Senior Vice President of Challenger, Gray & Christmas, Inc.

“The lower numbers certainly indicate some companies impacted by shutdown orders were able to reopen and stave off cutting jobs. However, as case counts rise and more jurisdictions impose stricter enforcement, and stimulus money dries up with no coming legislation, uncertainty is likely guiding many company decisions on retaining workers,” he added.

Energy companies followed in October with 11,787 cuts, bringing the year-to-date total to 47,736, more than double the 23,778 cuts announced in the sector last year. It is the highest year-to-date total for the industry since 2016, when 103,147 cuts were announced through October.

Transportation companies announced the third-highest total for the month with 11,475 cuts, as airlines grapple with reduced travel and lower revenue. This sector has announced 159,674 cuts in the first ten months of 2020, a 530% increase from the 25,341 announced in the same period last year.
Retailers have announced 179,520 cuts so far this year, up 151% from the 71,485 cuts announced through October 2019.

Companies have announced 255,198 hiring plans in October, bringing the year-to-date total to 2,928,091. Of those, 699,900 are seasonal hiring plans for the holidays. Retailers are responsible for the bulk of these plans, with 1,096,678, as demand for grocery stores and online shopping skyrocketed during the pandemic, while Transportation companies like shipping and trucking announced another 737,500 hiring plans.