March Madness Will Cost Employers $2.3B Per Hour 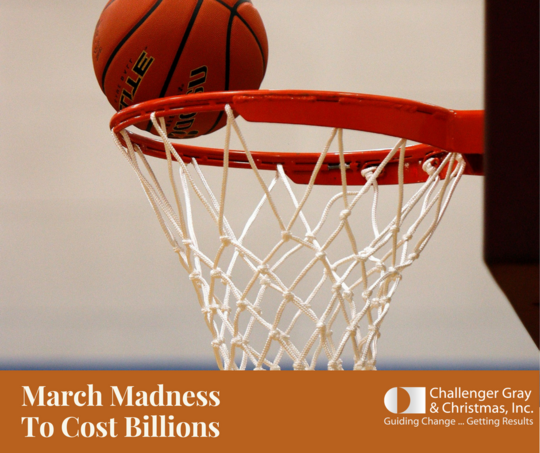 March Madness starts next week, which means basketball fans across the country are starting to think about their brackets. If you want morale to soar, you might consider offering workers the same deal Warren Buffett is proposing to Berkshire Hathaway employees. Buffett’s contest prize will award $1 million a year for life to the extremely lucky worker who manages to correctly predict the Sweet Sixteen, as the odds of filling out a perfect bracket can be as low as one in 9.2 quintillion – assuming each team had a fair 50 percent chance of winning a game – the odds are in Buffett’s favor.

However, even if you are not willing to bet $1 million a year, the tournament will still cost employers $2.3 billion per hour in time employees are engaged with the tournament at work, according to one estimate.

“Between streaming games during work hours to filling out brackets to just discussing the games with co-workers, it’s likely employees will spend much more than one hour during the week-long tournament engaged in March Madness-related activities at work,” said Andrew Challenger, Vice President of global outplacement and executive coaching firm Challenger, Gray & Christmas, Inc.

“The 2017 games saw 88 million livestreams. Even workers who aren’t deskbound will be distracted by these games. Bump time spent to two hours, and the tournament could cost employers nearly $5 billion in wages paid to distracted, unproductive workers,” he added.

More than 40 million Americans fill out tournament brackets, according to the American Gaming Association. Applying the current employment-to-population ratio to that figure indicates that 23.7 million workers will fill out brackets for this year’s games.

Challenger’s estimate is based on the number of working Americans who are likely to be caught up in March Madness, the estimated time spent filling out brackets and streaming games, and average hourly earnings, which, in January, stood at $26.74, according to the Bureau of Labor Statistics (BLS).

The challenge is estimating the number of people who participate in March Madness. A 2015 estimate from the American Gaming Association indicated 40 million Americans fill out 70 million brackets. A 2014 article at Smithsonian.com put the number of Americans “filling out brackets” at 60 million.
Using the current employment-to-population ratio of 60.1 percent and the more recent 40 million estimate, 24 million workers may fill out brackets.

Meanwhile, a 2012 MSN survey found that 86 percent of all workers will devote at least part of their workday to updating brackets, checking scores, and following games during the tournament. If that survey sample was representative of the U.S. workforce, it means that the number of working Americans with “March Madness” could reach 132.8 million.

Furthermore, the MSN survey indicated that 56 percent of all workers planned to spend at least one hour on March Madness activities. Assuming that percentage holds for this year’s tournament, that is roughly 86.5 million workers who will each cost their employers an average of $26.74 in wages for an hour of wasted productivity. That comes to a total of $2.3 billion for the group (86.5 million X $26.74).

“The tournament is a perfect opportunity for colleagues to bond in the workplace. Any attempt to keep workers from the games would most likely result in real damage to employee morale, loyalty, and engagement that would far outweigh any short-term benefit to productivity. Employers should embrace March Madness and seek ways to use it as a tool to foster camaraderie,” said Challenger.

“Employers could create company-wide office pools that are free to enter and offer lunches or gift cards to the winner. They should also consider setting up a television or computer monitor where workers can gather to watch the games. This could also eliminate the need for individual workers to stream games, thus freeing up bandwidth and potentially giving the IT department a break.”

“Consider giving employees extended lunches or offering longer breaks at other times throughout the day to allow them to catch games that interest them. Employers could also offer telecommuting options so workers who are able can have the games on in the background at home as they work.”

“A great recruitment tool, especially to younger workers just out of college, may be to promote how the office celebrates and engages in March Madness. In a tight labor market, any selling point can help attract talent,” added Challenger.