2020 May CEO Report: Exits Jump to 83 After Falling to Lowest Number Since November 2004 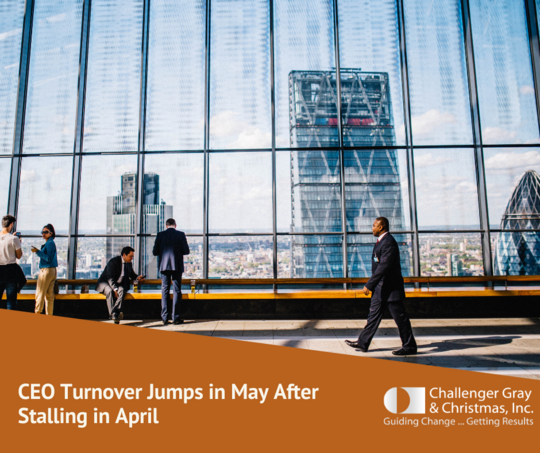 Government/Non-Profit sector CEOs announced the highest number of changes in May with 20, a 233% increase over April’s six, but a 26% decrease over the 27 reported in May 2019. This sector, which includes charities, foundations, and government-run entities such as transportation authorities or public education, leads all industries in CEO turnover this year with 93, down 34% from the 141 reported in the first five months of 2019.

“Government employment fell by 1,548,000 jobs in April and May, according to the Bureau of Labor Statistics. This could be caused by cuts in funding at all levels and will only be exacerbated by a deepening recession,” said Challenger.

The Technology sector reported the second-highest number of CEO replacements in May with ten, an 11% increase over April’s nine and a 50% decrease over the 20 reported one year earlier in May. The Tech sector has announced 73 chief executive exits so far this year, 12.3% higher than the 65 recorded in the same time period last year.

“The Tech sector has maintained hiring throughout the downturn and is still a solid sector, especially as more companies rely on cloud-based and remote technologies to continue their work in the current environment. Like in 2019, when we saw record-high CEO turnover during a tight labor market and labor shortage, particularly in Tech, these CEOs may have a plethora of opportunities, which would explain the movement,” said Challenger.

“The majority of job cuts during the pandemic have come from companies in the Entertainment/Leisure sector, which includes bars, restaurants, hotels, and amusement parks,” said Challenger.

“These companies are also making leadership changes as Boards grapple with how to do business without visitors,” he added.

So far this year, Entertainment/Leisure companies have seen 45 chief executive departures, up 114% from the 21 who left their posts through this point last year.

Of those who gave a reason for leaving their position, the majority of CEOs (18) retired, followed closely by 15 who stepped down. Ten reported their interim period had ended, eight moved on to new opportunities, and another eight resigned.