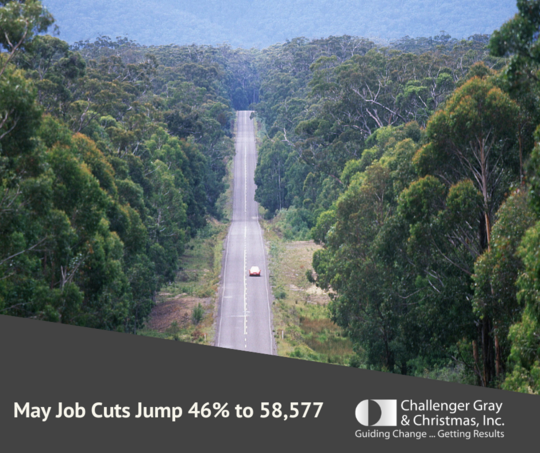 “While job cuts in the Retail sector appear to have slowed, brick-and-mortar retailers continue to close stores and compete with the ease of online sellers. Since January 2017, we have tracked 18,242 announced store closures,” said Challenger.

“Industrial Manufacturing and Automotive companies are also announcing an increasing number of job cuts. This is significant, as these industries are likely to be most hurt by the potential trade war with Mexico, increasing costs, and lower consumer demand,” said Challenger.

So far this year, Industrial companies have announced 44,552 cuts, the second highest of the year and 671% higher than the 5,782 job cuts announced through May 2018. 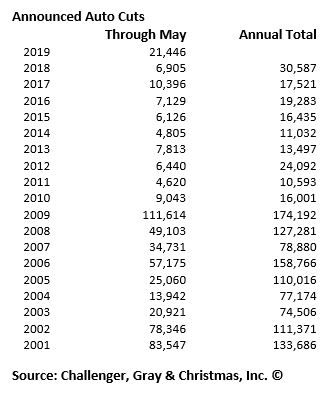 “Automakers and suppliers, like big Tech companies, are streamlining their workforces to remain competitive. Last month’s announcement from Ford included the discussion that many of the cuts will reduce bureaucracy to make the company nimbler,” said Challenger.

In May, Ford announced they were completing 7,000 job cuts, or 10% of salaried staff, this summer. Challenger previously counted all but the 800 cuts occurring in the U.S. through August.

The Challenger Report found that employers based in the Eastern U.S. are announcing the highest number of job cuts, with 87,422. That is 33% higher than the 65,562 cuts announced in this region through May last year.

Challenger is also breaking out Financial Tech firms, which will be referred to as “FinTech.” These changes are represented in Table 2 (Job Cuts by Industry) and Table 7 (Announced Hiring Plans). Download full tables below.