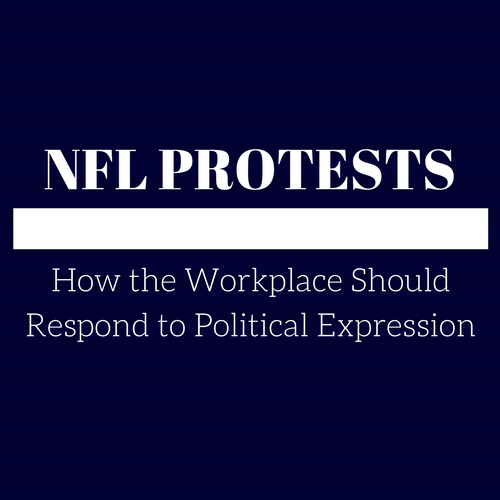 “It is surprising to many, but the first amendment does not extend to workers in private companies. The league does have the right to establish rules with consequences,” said Andrew Challenger, Vice President of global outplacement and executive coaching firm Challenger, Gray & Christmas, Inc.

“Companies sometimes get dragged into political conflicts against their will. They should try to remain neutral and broker a win-win for both sides,” added Challenger.

In fact, a recent Challenger survey found that 94 percent of respondents have witnessed political discussions in the workplace, with 18.2 percent reporting that those discussions happen often.

“The NFL protests are effective because the players are on a national stage with an audience of millions. Attempting to halt the pre-game protests with a rule would likely escalate the situation,” said Challenger.

President Trump’s tweets calling for protesting players to be fired drew powerful attention, and many of the 32 teams in the NFL released statements from owners – only one of which mentioned “injustice that has plagued people of color” in the United States (Seahawks). During Week 3, several teams linked arms during the national anthem, while other teams – the Steelers, Titans, and Seahawks – stayed in the locker room.

When NFL Commissioner Roger Goodell and NFL leadership met in New York City on October 17th to discuss the national anthem protests and vote on a rule requiring players to stand, a vote did not occur and no such rule was passed. While Goodell said the NFL believes everyone should stand for the national anthem, he would not commit to a rule change, as players were “not doing this in any way to be disrespectful to the flag.”

With no rule in place to force players to stand, there will be no official league punishment for players who protest. However, many teams may have their own guidelines in place to discourage protests. Players such as Eric Reid and Michael Bennett confirmed they will continue to protest.

“Suppressing demonstrating employees by brute force tends to further politicize the situation. It’s better to remain apolitical and try to deescalate the political tension by having private conversations within the organization,” said Challenger.

“In today’s climate, employers recognize political discourse is unavoidable at work. However, employers must be careful that these discussions do not violate anti-discrimination or harassment laws,” added Challenger.

Management should refrain from political discussions or imposing their own viewpoints on their subordinates. Above all else, respect and professionalism must prevail in the workplace to ensure success and growth. The consistent and uniform administration of policies and procedures is the best way to ensure a positive working environment, regardless of the profession.

While employees have a constitutional right to freedom of speech and assembly, these rights are in place to protect individuals against government interference rather than political expression in a private workplace. Therefore, unless an individual works in government at the federal or state level, there is no constitutionally protected right to free speech or assembly at work.