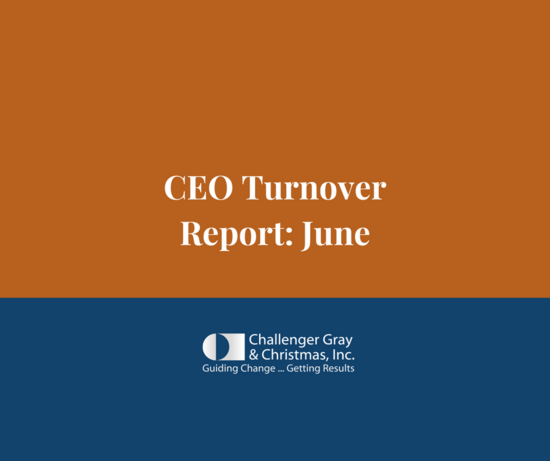 The number of chief executive officers leaving their posts reached 90 in June, virtually unchanged from the 91 who did so in May. June’s total rounds out the quarter at 290 CEO exits, up 9 percent from the same quarter last year, according to a report released Wednesday by global outplacement consultancy and executive coaching firm Challenger, Gray & Christmas, Inc.

“That said, the CEOs re-entering the job market are a boon for other companies in such a tight labor market,” he added.

Through June, 10 percent of CEOs found new positions in other companies or left to pursue other interests.

The Government/Non-Profit sector leads all industries in departures this year with 118, 55 percent more than the 76 CEOs who left in this sector last year.

“Companies in the Government and Non-Profit space are dealing with uncertainty surrounding federal funding and budgeting, as well as policies of the Trump Administration, which typically leads to leadership changes,” said Challenger.

Computer companies announced 78 exits so far this year, 90 percent more than the 41 CEOs who left their posts through June 2017.

“Disruptive technology continues to impact all industries, but especially those in the tech sector,” said Challenger.

Meanwhile, Health Care/Products firms have announced 66 CEO exits in 2018, and Financial companies reported 59 through the year.

Most CEOs, 190, stepped down into other leadership roles in the company, usually as a Board Member or other C-Level executive. Another 189 retired, while 78 resigned from their positions. Another 39 saw their interim period end.