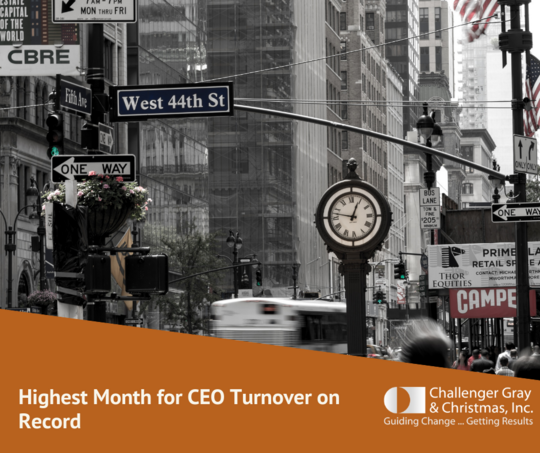 Twenty chief executives left for new employment in other companies last month, 24 percent of all CEOs who have left for that reason this year. This may signal that the tight labor market and demand for high-level talent are drawing CEOs to better opportunities.

“Companies are battling for talent in the current environment. Those that have taken the tax cuts and expanded operations are finding themselves in need of people to run these organizations. Others are reaping the benefits of strong consumer spending,” said Andrew Challenger, Vice President of Challenger, Gray & Christmas, Inc.

“Meanwhile, some companies are dealing with uncertainty in the markets, disruptions in technology, or fallout from impending tariffs. Regardless of the reason, boards need strong talent with specific skillsets and are looking to make these changes now,” he added.

Through August, 249 CEOs have retired from their companies, suggesting they are not moving to leadership positions in other companies. Another 250 stepped down from their roles, typically into a C-level or board member position.

Thirteen CEOs were terminated from their positions, typically due to no confidence from the boards, while ten left amid scandal.

The Government/Non-Profit sector leads all industries in departures this year with 170, 25 of which occurred in August. Computer companies have announced 99 CEO departures through the first eight months of the year.

PepsiCo’s Indra Nooyi announced her departure last month after 12 years at the helm. She will be replaced by President Ramon Laguarta. So far this year, 152 women have left the CEO role. Of the 716 announced replacements, 161 are women, or 22 percent according to Challenger tracking. Through August last year, 18 percent of replacement CEOs were women, 119 women out of a total of 656 recorded replacement CEOs.