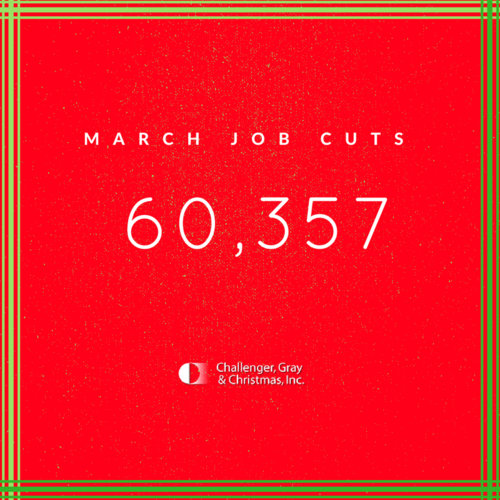 Job cuts announced by U.S.-based employers surged in March to 60,357, a 71 percent increase from the 35,369 cuts announced in February. Last month’s total is the highest monthly total since April 2016, when 64,141 job cuts were announced, according to a report released Thursday by global outplacement and executive coaching firm Challenger, Gray & Christmas, Inc.

“We’ve experienced 22 months of relatively low planned layoff activity. With the current economic conditions, companies are in a position to grow and invest. We’ve seen companies invest back into their workforces in the last couple of months,” said John Challenger, Chief Executive Officer of Challenger, Gray & Christmas, Inc.

“However, last month’s plans may indicate that growth could be slowing down, especially as the market continues to tighten,” he added.

March’s total is 39 percent higher than the 43,310 announced job cuts during the same month last year.

“In 2016, cuts in retail and oil drove announcements in the first quarter. This year, we are likewise seeing cuts in retail, as that industry continues to pivot to meet consumer demand,” said Challenger.

“The growth and job creation we’ve seen over the last few months may be coming to an end. As wages grow and the labor market tightens, companies are going to switch to a no-risk strategy and potentially begin contracting,” said Challenger.

In fact, the number of hiring announcements fell in March; companies announced plans to hire 14,525 last month, bringing the year-to-date total to 196,340. This is 32 percent lower than the 289,272 announced hiring plans in the first quarter of 2017.