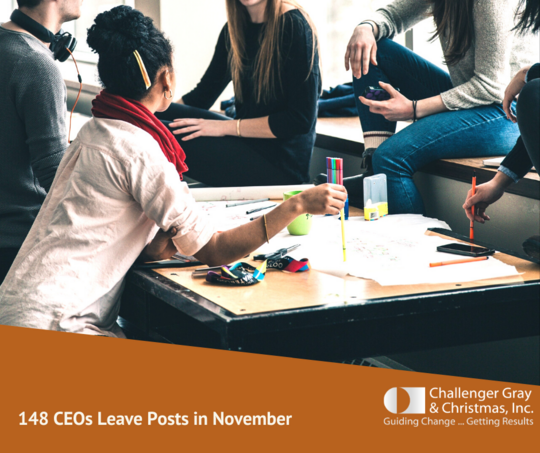 The Government/Non-Profit sector leads all industries in CEO turnover with 310. That is 20% more than the 258 chief executives who left their positions through November last year. These companies include government agencies, Chambers of Commerce, education companies, charities, and foundations.

Four chief executives left their posts amid allegations of professional misconduct, including two who reportedly had inappropriate consensual relationships, bringing the year-to-date total to 14. Investigations into financial wrongdoing, ethical violations, or behavior that goes against company policies also fall into this category.

Companies appear to be keeping their institutional knowledge intact, at least for a limited amount of time. The majority of CEOs (527) stepped down into other roles within their companies, typically to assist in the transition as a consultant, into another C-level position, or into a Board Member or Chairperson role.

Another 355 retired, while 138 found new positions in other companies. An additional 127 CEOs Resigned, while 109 left with no official reason given. Thirty-six CEOs left amid a merger or acquisition, and 22 were terminated, meaning the Board terminated their employment.

Highlight: 2019 looks to be a record year for CEO departures. “We have new companies that have outgrown their founder CEOs… we have legacy organizations that are fighting… new competitors,” says @ChallengerGray’s Andrew Challenger. More: pic.twitter.com/JtewATG7L9

High churn at the CEO spot continues with 148 exits in November, via @CNBC @mkmfitzgerald https://t.co/WwWPx9TRir