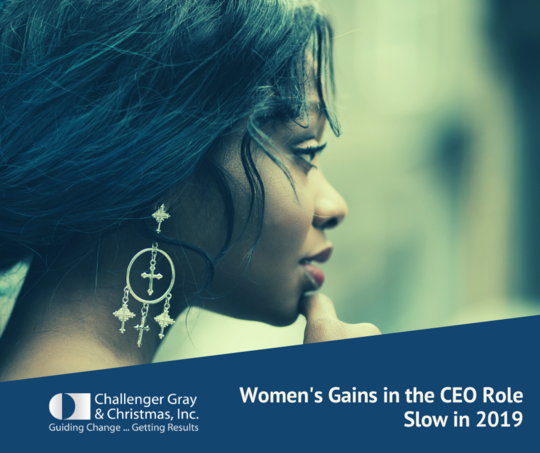 In a year with the highest CEO turnover on record, women saw fewer gains in 2019 than in 2018, according to an analysis of CEO turnover data from global outplacement and business and executive coaching firm Challenger, Gray & Christmas, Inc.

Last year, 1,640 chief executives left their posts. Of those, Challenger tracked 1,422 replacement CEOs, 308 (21.7%) of whom were women. It is the highest number of women CEO replacements since the firm began tracking the sex of exiting CEOs and their replacements in 2010.

“It is a bit surprising given the current culture, as well as the sheer number of high-profile male chief executives who have left their posts due to allegations of inappropriate behavior, that we did not see the number of women CEO replacements trend up,” said Andrew Challenger, Vice President of Challenger, Gray & Christmas, Inc.

Indeed, men still represent the vast majority of CEO replacements, accounting for 78% of the replacements recorded so far this year. In 131 of those instances, men were named as replacements for women. Women replaced male CEOs 189 times in 2019.

The Government/Non-Profit sector has named the most women CEOs in the first half of this year with 114, 43.3% of all incoming CEOs in that industry. Thirty-five of 98 CEO replacements (36%) at Hospitals were women. Apparel companies have the highest rate of women CEO replacements, with seven of 13 total.

A total of six industries Challenger tracks did not announce any new female CEOs in 2019.

“More companies need to ensure women are in the leadership pipeline that feeds the CEO role. Most CEOs are culled from a company’s own ranks. In fact, since 2010, only three years saw more CEO replacements come from outside the organization than inside,” said Challenger.

Of the external replacements, 164 were women, while 298 new CEOs were women who came from inside the organization.