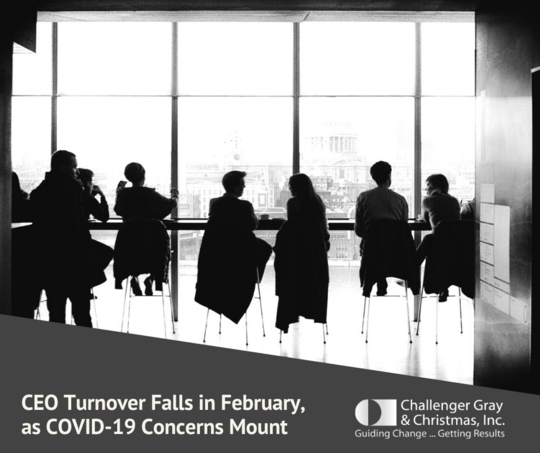 “The virus is contributing to both a supply and demand shock, as well as a downturn in foreign demand. After supply was cut off in mid-January in response to the first reported death from the virus in China, many companies have been working to understand the impact in both the short and long term,” he added.

Using SEC filings, news reports, and company announcements, Challenger tracks CEO changes each month from U.S.-based companies that have been in business for at least two years and employ a minimum of ten employees. So far this year, Challenger has tracked ten CEO exits from Fortune 1000 companies.

February’s total was led by the Government/Non-Profit sector, which saw 22 chief executive exits, for a total of 63 this year. That is 6.8% higher than the 59 CEOs who left their posts in this sector during the same period last year.

The Technology sector followed with 16 exits in February, for a year-to-date total of 51, 121.7% higher than the 23 who left their posts through February 2019.

“The Technology sector is undergoing massive changes, and boards are requiring leaders who can handle either a new phase of growth or the need to pivot to new technology, along with changing consumer behavior,” said Challenger.

The Services sector, which includes consulting, accounting, engineering, and marketing services, announced 13 CEO changes last month, for a total of 30 this year.

The majority of CEOs (43) resigned last month, while 29 retired from their posts. Twelve saw their interim periods end, while seven found new opportunities. Three CEOs left amid scandal last month.
Of the 313 replacements Challenger tracked this year, 168 came from outside the company, while 145 were internal candidates. So far this year, 24% of replacement CEOs are women.