Commentary: Coronavirus Crash Could Cause Layoffs in 4 Waves 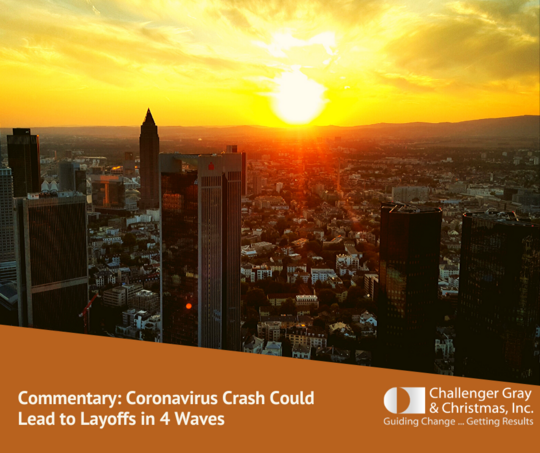 Last week, India-based hotel partner start-up Oyo Hotels announced 5,000 job cuts worldwide due to the outbreak of coronavirus, with roughly 2,000 occurring in the US and India. Meanwhile, Florida-based toy maker Basic Fun! Announced 18 job cuts due to a work stoppage at the company’s Chinese facilities, 10 of which will occur in the United States. The virus could cause wide-scale layoffs in four waves, according to one workplace authority.

“Economists may look back and discover that we entered the recession on February 21, the day the stock market started falling. The catalyst for the recession: the impact of the coronavirus on the global economy,” said Andrew Challenger, Senior Vice President of global outplacement and business and executive coaching firm Challenger, Gray & Christmas, Inc.

“Companies who are weighing cuts due to supply shock have been weighing the possibility for some time. The supply chain from Asia has been in trouble since mid-January, when the Chinese government reported the first death from the virus,” said Challenger.

The Caixin/Markit Purchasing Managers Index, a private survey which reads Chinese manufacturing activity, fell to 40.3, its lowest point on record and 5 points lower than expectations, in February. Meanwhile, 2 million shipping containers were idled in late February, a record, according to a French marine data provider, Alphaliner. That is half a million more containers than were idled during the height of the financial crisis in 2009.

Indeed, demand for air travel has fallen swiftly around the globe. According to the trade organization Airlines for America, the downturn in demand could cost airlines between $63 and $113 billion in lost revenue this year. Carriers including United Airlines, JetBlue, and Lufthansa have suspended routes, and many air travelers report nearly empty planes and airports.

Meanwhile, SXSW a music, media, and comedy conference held in Austin, TX that attracted 161,000 attendees in 2018, just canceled its March 16th-22nd event. The Emerald City Comic Con, which takes place in Seattle, had a number of presenters and distributors pull out amid an outbreak centering in nearby Kirkland, WA, and announced it was postponing the event until the summer. The Los Angeles Times listed 19 canceled or postponed business conferences, including Facebook’s F8 conference and Google’s I/O, both scheduled for May.

“Companies are stuck between a rock and a hard place. Two weeks ago, companies were dealing with an acute recruiting and talent management crisis for skilled workers. Now, CHROs and their HR teams are facing the prospect of layoffs. No company wants to make quick decisions about cutting workers, especially if employers find that the Coronavirus is really a Y2k-type crisis. They may be unable to bring back their laid-off talent that were so hard to find in the first place,” said Challenger.