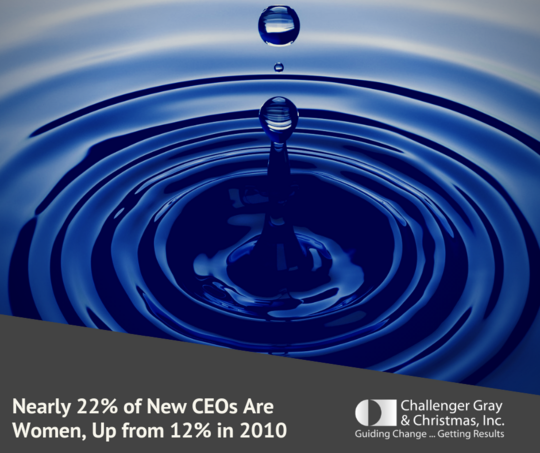 The rate of new women CEOs is up significantly from 2010, the first year Challenger began tracking this data, when 12.4% of CEO replacements were women.

“It is clear that over the last nine years women have made significant strides in the chief executive role. That said, companies are installing men as CEOs far more often than they are women,” said Andrew Challenger, Vice President of Challenger, Gray & Christmas, Inc.

“Gender diversity, along with other visible and unseen diversity, is crucial to creating an environment that finds and develops the best talent for the role. Those in positions of power who make employment decisions and create teams tend to hire people who are similar to them. It’s an inherent bias. When companies make it a point to promote a diverse slate of candidates and try to sidestep this bias, they cast a wide net to find the best talent,” he added.

Indeed, men still represent the vast majority of CEO replacements, accounting for 78 percent of the replacements recorded so far this year. In 49 of those instances, men were named as replacements for women. So far in 2019, women have replaced male CEOs 81 times.

The Government/Non-Profit sector has named the most women CEOs in the first half of this year with 53, 44.2% of all incoming CEOs in that industry. Nine of 25 CEO replacements (36%) at Hospitals were women. Apparel companies have the highest rate of women CEO replacements with four of six total replacements.

A total of 12 industries Challenger tracks have not announced any new CEOs who are women in 2019.
In the first half of this year, companies have announced 726 chief executive exits, the most since 2006, when 728 CEO changes were recorded in the first six months of the year.

“Clearly, companies are making decisions about their CEO candidate. Well over 100 companies have yet to announce who will take the reins from their outgoing CEO this year. They would be wise to look at their more diverse talent when making this decision,” said Challenger. 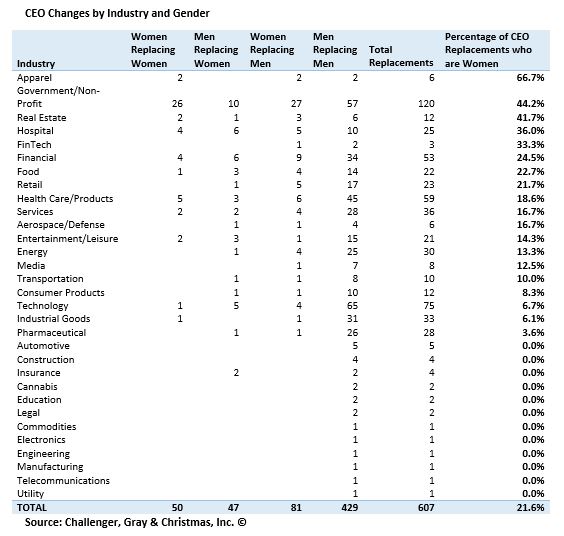