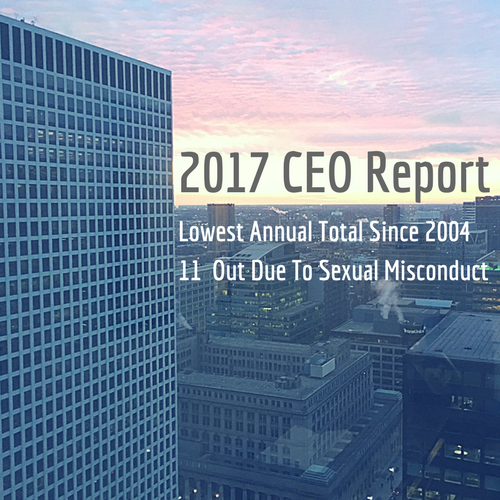 Last year’s departures were down 7 percent from the 1,248 announced in 2016. December’s total was 4 percent lower than December 2016, when 99 CEO exits were announced.

“In fact, most of the leaders who did leave their roles last year stayed with the company in some capacity, typically as a board member or other C-level executive,” he added.

Thirty percent of the CEOs who left their posts stepped down into other roles. That is compared to 21.4 percent of all CEO changes in 2016, and 19.7 percent in 2015.

“Those companies that did choose to change their CEOs clearly wanted to keep some of their institutional knowledge in the C-suites and board rooms,” said Challenger.

“The #MeToo movement, so inspiring to women and men who have endured abuse, particularly at work, also inspired companies. Not only are many companies reevaluating their sexual harassment policies and procedures, but many are operating under a zero-tolerance policy, especially regarding the heads of their organizations,” said Challenger.

In an analysis of news reports of allegations made since October, Challenger found that 71 percent of alleged abuse occurred in the workplace. Twenty-six percent was reported to the company.

“Companies are more poised than ever to create a safe environment for workers. Cases of sexual misconduct, discussions of which were previously kept in house, if not ignored, are now being openly discussed and exposed. This kind of accountability begins with the person in the top spot,” said Challenger.

The Government/Non-Profit sector led all industries in announced departures last year with 191, 18 of which were announced in December. This is 6.4 percent lower than the 204 CEOs who left this sector in 2016.

California had the highest number of CEO changes, with a 12-month total of 139, ten in December. Texas followed with 105 departures last year. New York announced 68 CEO changes in 2017, while Florida announced 61.

Most CEOs (351) stepped down from their posts into other Board or C-suite positions, and 320 retired. Another 172 officially resigned from their posts, while 78 found new positions at other companies. 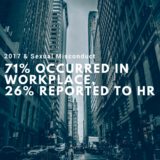