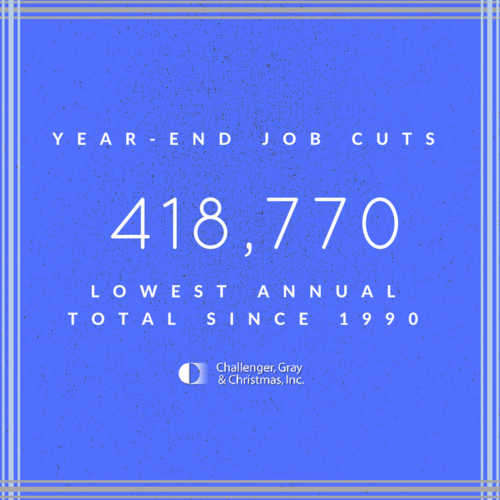 U.S.-based employers announced 32,423 job cuts in the last month of the year, bringing the year-end total to 418,770. That is the lowest annual total since 1990*, when 316,047 cuts were recorded, according to a report released Thursday by global outplacement consultancy Challenger, Gray & Christmas, Inc.

“The retail pivot that caused thousands of store closures and job cuts was not seen in any other industry this year,” said John Challenger, Chief Executive Officer of Challenger, Gray & Christmas, Inc.

“While companies in the Pharmaceutical, Health Care, Construction, and Food industries did announce more job cuts than last year, it was nothing like the Energy cuts seen in the last two years or the Financial cuts seen during the recession,” added Challenger.

Retail’s restructuring led to 76,084 job cuts this year, a 28.2 percent increase from 2016, when 59,324 job cuts were announced. The move from brick-and-mortar to online shopping has caused over 7,400 store closures, according to Challenger tracking.

The Health Care sector announced 40,732 job cuts, 118 percent more than last year’s annual total for the industry of 18,725. The Services sector announced 36,174 cuts this year, nearly quadrupling the total from last year, which was 9,917.

Meanwhile, announced hiring plans are the highest on record, according to Challenger tracking. Employers announced plans to hire over 1,100,000 new hires, 27 percent more than the 868,702 announced last year.

“While we may see more job cuts in the first quarter of 2018, some companies have announced wage increases and bonuses for employees due to the passing of the tax bill,” said Challenger.

*Challenger began tracking job cuts in 1993. Prior years’ job cuts were calculated by a newsletter no longer in circulation.