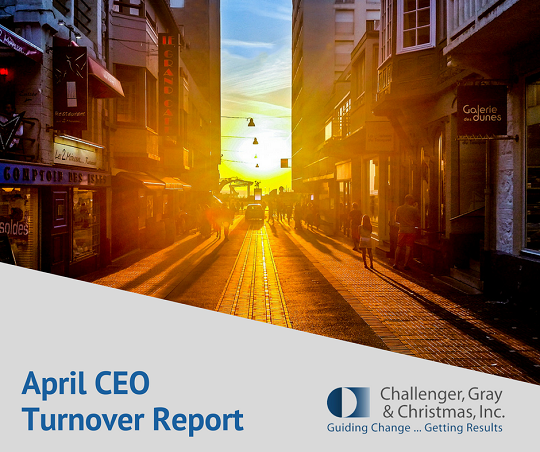 While April saw the economy add 164,000 jobs and the unemployment rate edge down to 3.9 percent, a total of 109 Chief Executive Officers left their posts at U.S.-based companies during the month, according to a report released Wednesday by global outplacement consultancy and executive coaching firm Challenger, Gray & Christmas, Inc.

“Although the economy seems to be booming, companies appear to be readying for change,” said Andrew Challenger, Vice President of Challenger, Gray & Christmas, Inc.

The Government/Non-Profit sector continues to lead all industries in departures, with 87, 23 of which occurred in April. This sector announced 64 percent more CEO changes in 2018 than through the same period last year.

“The increased activity in Government and Non-Profit entities could be due to changing legislation and redistribution of federal funding. Other sectors that have seen an increase in CEO change activity include the Computer industry, which is seeing a number of disruptive technologies, as well as those related to consumer behavior,” noted Challenger.

Health Care/Products firms have announced 45 CEO exits in 2018, including nine in April. Financial companies have reported 43 through the year.

Most CEOs (135), have stepped down into other positions within the company, usually as a Board Member or other C-Level executive. Another 132 retired from their positions and 60 resigned.

California companies saw the highest number of CEO changes this year with 49, 12 of which occurred in April. Companies in Texas saw 12 departures last month, while Florida reported 11.