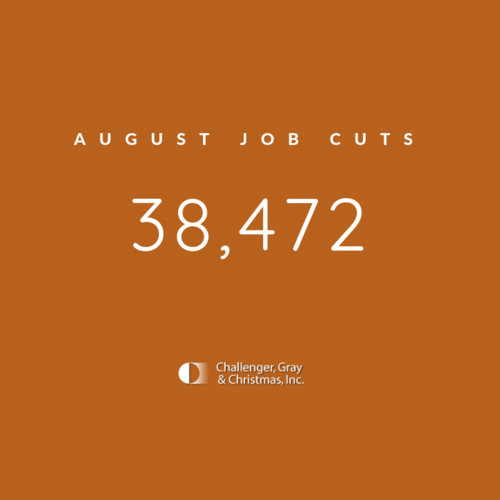 So far this year, employers have announced 310,773 cuts, 7.5 percent higher than the 289,132 cuts announced through this point last year.

Last month saw an increase in companies attributing job cuts to tariffs, specifically tariffs on imported steel, which are ongoing, and newsprint, which have recently been overturned. Companies announced 521 job cuts due to these tariffs in August, for a total of 591 so far this year. Challenger also tracked 613 cuts due to lower demand for coal.

While tariffs have been blamed for cuts, U.S. steel makers announced plans to hire 359 workers in August.

Industrial Goods manufacturers lead in job cut plans in August with 10,188, bringing the year-to-date total to 18,464. Half of these cuts were announced by Johnson Controls, which plans to cut 9,200 jobs by 2020 while also adding 900 sales jobs by the end of the year.

Consumer Products manufacturers announced the second-highest number of job cuts in August with 4,716, bringing the year-to-date total to 26,926. This is 184.5 percent higher than the 9,465 cuts in this sector announced through August 2017.

“Manufacturers are grappling with rising costs, weak demand, and competition on a global scale. We may see additional job cuts as the full ramifications of imposed tariffs are felt,” said Challenger.
Retailers follow with 3,715 cuts announced in August. Retailers lead all industries in job cuts this year with 79,478.

Hiring announcements increased in August to 17,274, the highest total since February.

“Tech companies announced plans to hire over 7,000 workers in August. Demand for people with coding, web and software development, and network security skills and experience are in high demand right now,” said Challenger.