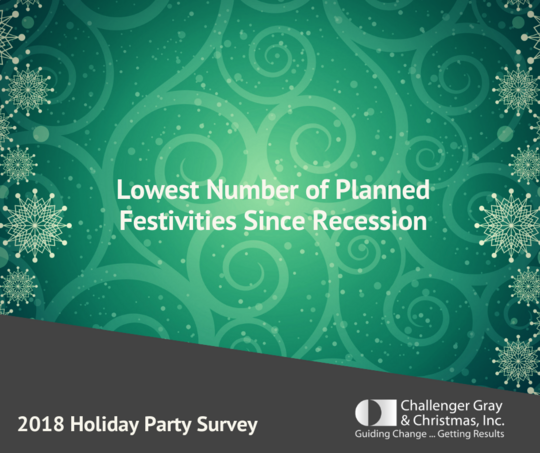 “The low number of corporate celebrations does not appear to be due to economic reasons. Companies are sitting on tax savings and generally report a thriving economy,” said Andrew Challenger, Vice President of Challenger, Gray & Christmas, Inc.

“We have never seen so many companies report that they never have holiday parties. The number could be due to several factors, including potential liability following the #MeToo movement,” he added.

In fact, of those companies that are having a party this year, nearly 58 percent reported they have addressed the #MeToo movement with their staff this year, 33 percent of which have addressed or will address this issue prior to the party. 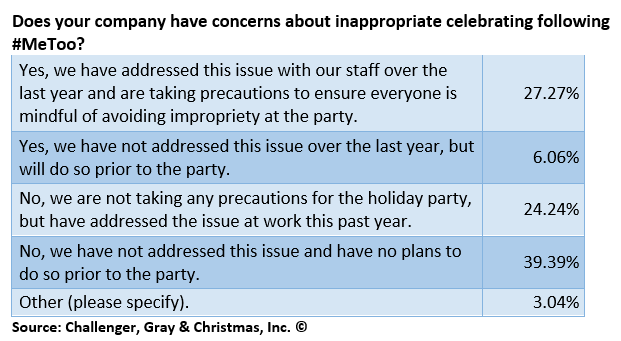 “Other reasons for fewer holiday parties could include that a company’s workforce is primarily remote and it’s too difficult to gather for a holiday party, or perhaps companies are having parties at other times of the year. However, the fact that nearly 60 percent of companies that are having parties have real concerns about inappropriate behavior shows that HR departments nationwide are responding to this particular issue,” said Challenger.

“In some cases, that response may mean eliminating the holiday party,” he added.

Despite the low number of company parties, those that are holding holiday festivities plan to spend more. Nearly a quarter of companies plan to increase the budget for the party, the highest since 2007, when 38 percent planned to budget more than the previous year. No companies planned to budget less than the previous year, the lowest number since 2012.

“The cost savings associated with corporate tax cuts may be used toward the party budget this year,” said Challenger.

“The impact of #MeToo has been overwhelmingly positive, and it’s clear the movement is spurring companies to enact important policies to protect workers – a huge boon to the business community,” said Challenger.

“The holiday party should be a time to celebrate the accomplishments of your workers as well as unite and gather as a team. Hopefully, for companies that are not having holiday get-togethers this year, they have other ways to recognize their people, so crucial to building morale and a positive culture,” he added. 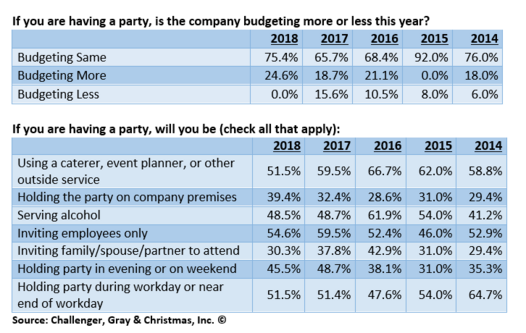