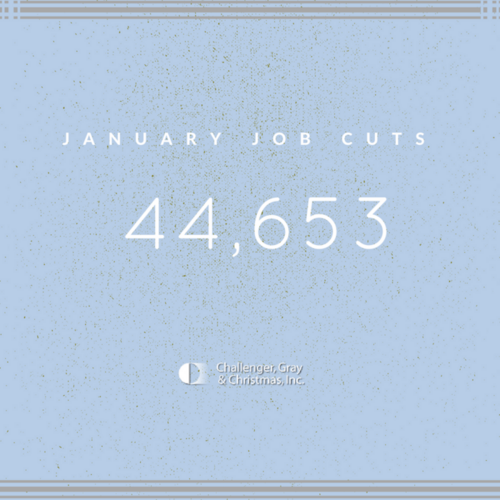 The nation’s employers announced plans to cut 44,653 jobs in January, 37.7 percent more than the 32,423 cuts announced in December, according to a report released Thursday by global outplacement consultancy Challenger, Gray & Christmas, Inc.

While January cuts were up from the previous month, they were 2.8 percent lower than the same month one year ago, when 45,934 cuts were announced.

“Many companies are enjoying relative financial health and a strong economy right now. The good news for those who are finding themselves separated from their previous companies is that employers are scrambling to find talent,” said John Challenger, Chief Executive Officer of Challenger, Gray & Christmas, Inc.

“Retail, Consumer Products, and Services are all sectors ripe for automation. This may spell a loss of jobs in the short term, but could create better, higher-paying jobs going forward,” said Challenger.
The Services sector announced 3,212 cuts in January, while companies in the Transportation sector announced 1,472 cuts last month.

“It remains to be seen what impact the passage of tax legislation will have on companies’ staffing plans. We’ve seen a number of companies announce one-time bonuses or a raise to their minimum wages. Other companies are planning new investments, and several have pledged new jobs,” said Challenger.

In fact, nearly 60 companies announced they are raising wages for their workers, typically to around $15 per hour.