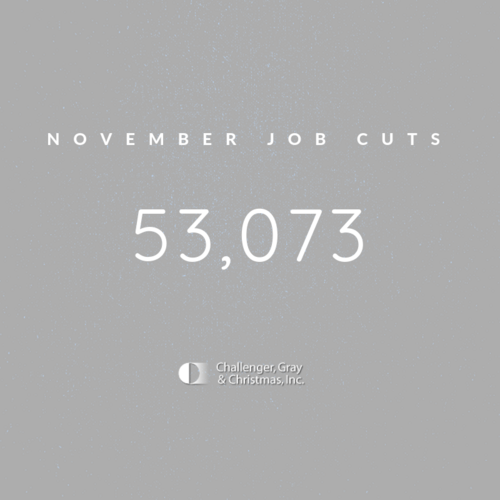 “Announcements like GM’s will not be the last, as companies adapt to shifting consumer behavior. We’ve already seen major plans in the U.S. from Verizon, Wells Fargo, and Toys“R”Us for exactly those reasons,” said Andrew Challenger, Vice President of Challenger, Gray & Christmas, Inc.

“The job market remains strong for the moment, however. The tight labor market and high demand for skilled workers mean most of those who find themselves unemployed have a good chance of finding new positions,” he added.

Retail continues to lead all sectors in job cut announcements with 96,504. Telecommunications companies follow with 59,518, while Financial firms have announced 41,351 cuts this year. Health Care and Health Care Products manufacturers announced 39,443 cuts through November. Companies in the Consumer Products sector have announced 30,733.

Companies in the Automotive sector have announced 28,529 cuts in 2018, 64 percent more than the 17,392 announced through November last year.

Companies claimed restructuring was the cause of 177,441 job cuts this year, while 136,605 were due to plant, unit, and/or store closures. Another 35,456 were due to bankruptcy proceedings. Last month, 93 cuts were attributed to tariffs, specifically tariffs on Chinese-imported paper, bringing the year-to-date total to 798.

Meanwhile, Challenger has tracked 1,002,449 hiring announcements this year, 714,000 of which are seasonal. Employers announced plans to hire 15,422 workers in November.