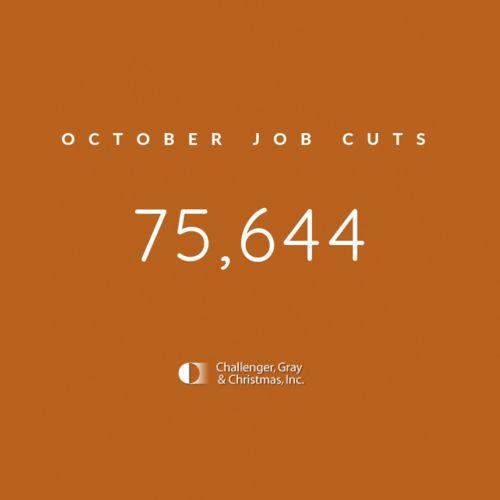 “All three of these companies are in industries facing serious disruptions, requiring companies to pivot to meet consumer demand. Buyout offers are a significant indicator that while companies are attempting to cut costs, they are also in a position to help facilitate the change process and take care of their workers,” said Andrew Challenger, Vice President of Challenger, Gray & Christmas, Inc.

“The good news for those accepting offers is now is a good time to look for a new job, especially if they act quickly. The increase in job cut announcements could indeed indicate we’re heading toward a downturn, although employers are still holding on to their workers for the most part,” he added.

“The economy is at near full employment, and job creation has typically surpassed expectations. Wages remain flat, however. Meanwhile, recent fluctuations in the stock market indicate investor concerns and that tariffs are beginning to have an impact.”

Retail continues to lead all sectors in job cut announcements with 92,375, 7,350 of which occurred in October. Much of these cuts were tied to Sears’s bankruptcy and announcement of 142 additional store closures. While the company does not put out a total number of cuts due to store closures, through Worker Adjustment and Retraining Notifications (WARNs), Challenger tracked 49 Sears and Kmart store closures in October, for a total of 3,044 cuts.

With Verizon’s announcement, Telecommunications follows Retail in the highest number of job cuts this year, with 59,518. The Financial sector comes in third with 41,036 job cut plans, 2,101 in October.

“We are experiencing a strong economy by multiple standards. However, other indicators show that this may not be sustainable. It remains to be seen, but the high turnover we’re experiencing at the C-Level may be another indicator of this potential, as companies hire leaders who can weather a storm,” said Challenger.

In fact, 396 CEO changes were announced in the third quarter, according to Challenger, the highest number of quarterly CEO changes since the firm began tracking in 2002.

Companies claimed restructuring was the cause of 165,193 job cuts this year, while 123,795 were due to plant, unit, or store closures. Another 18,440 cuts were due to Merger & Acquisition activity. Last month, 20 cuts were attributed to tariffs, bringing the year-to-date total to 705.

Meanwhile, Retail, Transportation, and Warehousing have continued to announce seasonal hires. Challenger has tracked 714,000 seasonal hiring announcements, the most since the firm began tracking individual announcements in 2012. Aside from seasonal hires, employers announced plans to hire 5,456 workers in October.