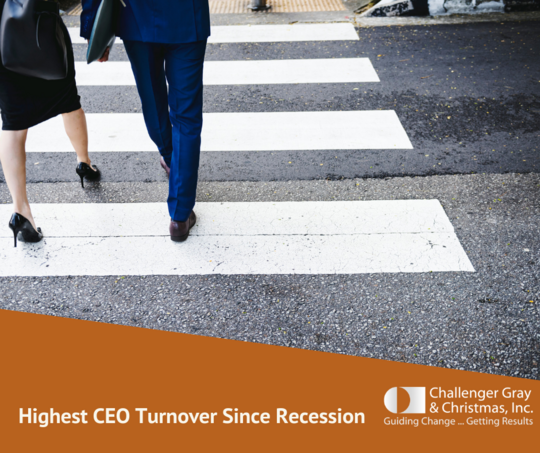 “There’s a lot of uncertainty as we begin 2019. While the job market is strong, with low unemployment and strong hiring numbers, the stock market is in near-constant flux; trade concerns loom in many industries, including manufacturing and technology; and the regulatory environment may change with a new Congress,” said Andrew Challenger, Vice President of Challenger, Gray & Christmas, Inc.

“Boards are anticipating a changing environment and putting leadership in place who are capable of succeeding in it,” he added.

Boards are also strictly enforcing company policies regarding relationship and/or ethics issues. Eight CEOs left amid sexual misconduct allegations and another four left due to allegations of professional misconduct.

The majority of CEOs (403) retired this year, about 27 percent of all CEO changes. This is on par with 2017, when 320 of 1,160 CEOs retired. Another 283 CEOs resigned from their positions, while 355 stepped down into other roles within the company, usually as a Board Chair or other C-Level executive.

Twenty-three CEOs were terminated by their Boards, while 14 left amid scandal this year.
Another 136 found new positions in other companies.

The Government/Non-Profit sector leads all industries in CEO turnover this year, with 276 departures, followed by the Financial sector, which announced 154 CEO changes. Companies in the Technology sector, referred to as “Computer,” had the third-highest number of CEO changes this year, with 152. Companies in this sector include software and web developers as well as companies that make hardware for personal computers.