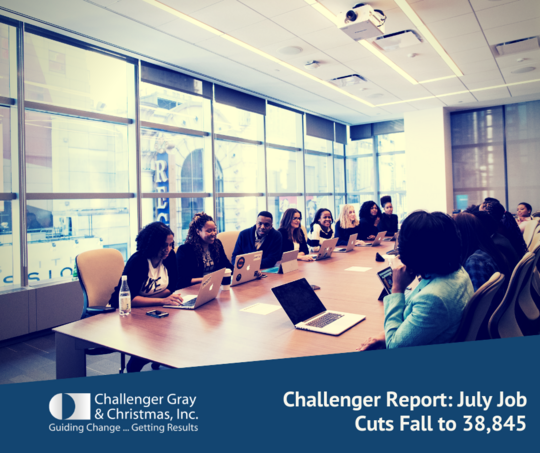 “The US is enjoying the longest economic expansion in American history and the June jobs report documented a decidedly strong labor market. However, slowing GDP growth in the second quarter, cuts in business investment, and trade tensions led the Federal Reserve to cut its key interest rate by a quarter-point. This move signals trouble on the horizon for the current economic cycle," said Andrew Challenger, Vice President of Challenger, Gray & Christmas, Inc.

"Employment tends to be a lagging indicator, as companies often keep hiring up to the edge of a recession. Right now, the labor market is strong. Employees can continue to anticipate moderate wage growth and advantageous employment prospects for the time being," he added.

“Manufacturers are being hit, not only by shifting consumer behavior and automation, but by the imposed tariffs. Last month saw over 1,000 cuts announced due to the impact of tariffs,” said Challenger.

Companies in the Industrial Goods sector have announced 52,054 cuts, 529% higher than the 8,276 announced in the first seven months of last year. Meanwhile, Automakers and suppliers announced plans to cut 34,379 jobs through July, up 194% from the 11,696 cuts announced through July of 2018.

While job cuts are up in every region, companies located in the Southern United States have seen the largest jump in job cut announcements, as employers in this region have announced 51% more job cuts than through the same period last year: 77,923 compared to 51,497 in 2018. Companies in the Eastern United States had the second-largest percentage increase with 39.9%, as employers in this region announced 108,806 cuts in 2019 compared to 77,795 last year (Table 3).