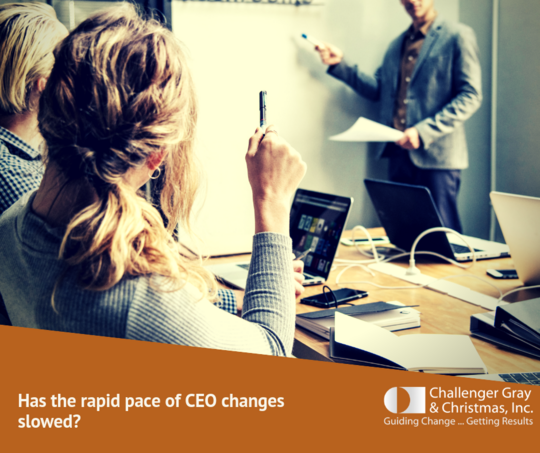 So far this year, 726 chief executives have left their posts, 15% more than the 631 who left the top spot at companies in the first half of 2018. It is the most first-half CEO changes since 2006, when 728 CEO changes were recorded.

“Companies are potentially preparing for a contraction in the market and installing leadership who can weather a storm. We’re also seeing a complicated landscape due to tariffs, deregulation, skills shortages, and technological advances, all impacting how companies do business and plan for the future,” said Andrew Challenger, Vice President of Challenger, Gray & Christmas, Inc.

Companies in the Government/Non-Profit sector announced the highest number of CEO changes in the second quarter with 67. The year-to-date total for this sector is 162, 37% higher than the 118 announced through June last year.

The Technology sector announced the second-highest number of CEO changes in the second quarter with 49, which makes 83 for the year. That is 6% higher than the 78 announced through this point last year.

Health Care/Products companies announced 29 CEO changes in the second quarter, bringing the year-to-date total to 70. Financial companies announced 27 CEO changes in Q2, for a total of 64.
Through June, 283 chief executives, or 39%, stepped down into other positions within their company, usually as a Chairperson or other member of the C-Suite. Another 201 have retired from the CEO role.

Seven CEOs left their positions due to an acquisition or merger in June, 70% of the ten CEOs who have left for this reason in 2019. That is compared to four CEOs who left for that reason through June 2018.