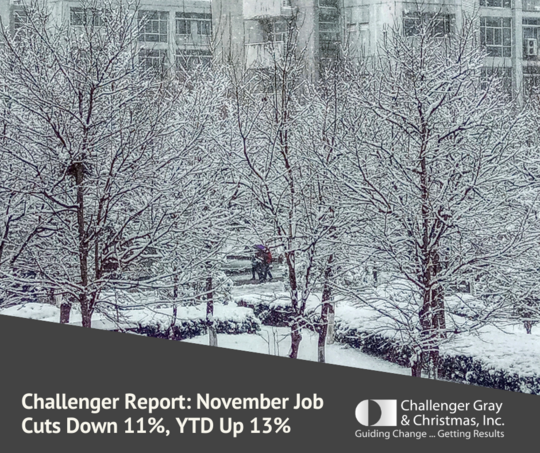 “The Tech sector is undergoing major changes due to an evolving landscape. New technologies are changing the way people work and often make workplaces more efficient. In addition to potential staffing changes, there may be differences within the leadership and board ranks regarding exactly which path a company will take. In fact, we have tracked the highest number of chief executive officer changes in the Tech sector on record this year,” said Challenger.

Health Care companies, including hospitals and medical products manufacturers, announced the second-highest total in November, with 6,247, the highest monthly total for the sector since January 2018, when 6,531 cuts were announced. Hospitals and other patient care facilities, such as nursing homes and psychiatric facilities, cited lower Medicare and Medicaid reimbursements, declining revenue, and the changing care landscape.

Automotive companies have announced 47,518 job cuts this year, 66.6% higher than the 28,529 announced through the same point last year. Challenger tracked 14,000 job cuts announced by General Motors in the Automotive sector one year ago in November. It is the highest total in the first 11 months of the year since 2009, when 165,281 cuts were recorded.

Meanwhile, hiring plans by U.S.-based employers are at a record high. Through October, companies have announced 1,181,438 hiring plans, 564,781 of which are for the holiday season (Table 8).

*Our report on November CEO turnover will be released Wednesday, December 11th at 7:00 a.m. ET.