2019 October CEO Report: Another High in a Record-Setting Year 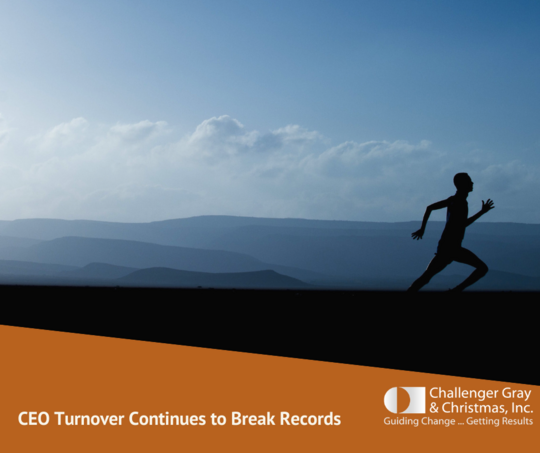 In fact, six CEOs left after allegations of professional misconduct, which include actions taken in the workplace that result in investigations or findings of wrongdoing.

“That said, we’ve seen the majority of CEOs leaving amid normal succession plans. Meanwhile, after a decade of expansion, companies that started ten years ago are finding themselves in a phase where new leadership is needed. Other companies are adapting to changing technologies or finding new leadership based on current economic conditions and forecasts for the coming year,” said Challenger.

The number of chief executive changes is higher than at any point on record. At this point during the Great Recession in 2008, the second-highest year for CEO turnover, 1,257 chief executives had announced exits, 6% lower than the current year-to-date total.

The majority (35) of chief executives left companies in the Government/Non-Profit sector last month. These companies include government agencies, Chambers of Commerce, education companies, charities, and foundations. This sector leads all sectors in CEO exits with 281, up 25% from the 225 who left their posts through October last year.

“Government firms are, in some cases, grappling with new legislation or political changes that influence leadership. Similarly with non-profits, CEOs often need to work with government officials for funding and priorities may have changed. Still more CEOs at these organizations are stepping down into other roles, typically to fundraise, and new leadership is being appointed,” said Challenger.

The Technology sector announced the second-highest number of CEO changes this year with 181, 188 when including CEO exits from the Telecommunications and Electronics industries. That is up 24% from the 152 CEOs who left their posts in those three industries through October last year.

Financial companies have announced the third-highest number of CEO changes with 104, 13 of which occurred in October. That is down 12% from the 118 Financial sector CEOs who left through October of last year.

Pharmaceutical companies have announced 55 CEO changes this year, up 45% from the 38 who left through October 2018.