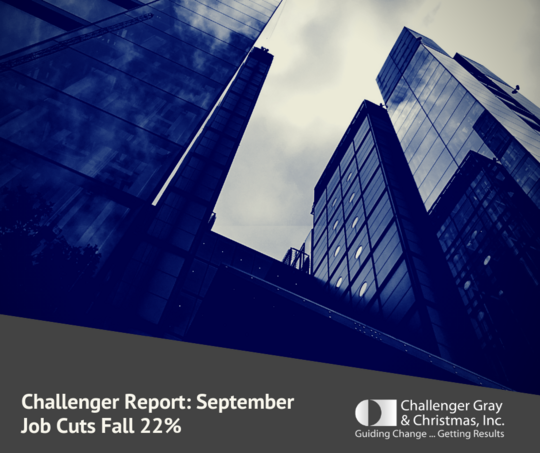 “Employers held off on making any large-scale employment decisions in September. Most likely, companies will monitor consumer behavior, government regulation or deregulation, and market conditions during the final quarter of the year in order to make staffing decisions for next year," said Andrew Challenger, Vice President of Challenger, Gray & Christmas, Inc.

Retail led all sectors in September with 8,132 announced cuts, bringing the year-to-date total to 65,358. That is 23.5% lower than the 85,385 cuts announced in this sector during the same period last year.

“Cuts in this sector will likely continue to rise, especially if the strike at General Motors continues and the fallout impacts suppliers. Canadian auto suppliers announced thousands of cuts last month,” said Challenger.

In addition to seasonal hiring, employers announced 34,725 hires in September, 30,000 of which came from Amazon. The company, which has not announced seasonal hiring plans, announced these positions would be permanent (Tables 6, 7).

While job cuts are up in every region, companies located in the Southern United States have seen the largest jump in job cut announcements, as employers in this region have announced 65% more job cuts than through the same period last year: 105,665 compared to 64,117 in 2018. Companies in the Eastern United States had the second-largest percentage increase, with 42%, as employers in this region announced 125,218 cuts in 2019 compared to 87,969 last year (Table 3).