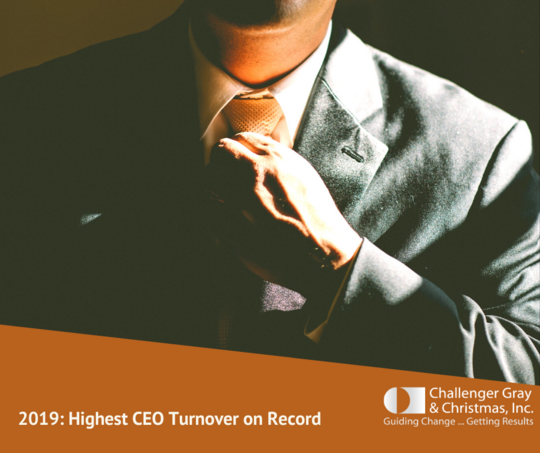 “Following the #MeToo movement, companies were determined to hold CEOs accountable for lapses in judgement pertaining to professional and personal conduct, creating higher ethical standards at the C-level. What may have gone unrecognized or was downplayed in the past was not overlooked by boards, shareholders, or the general public in 2019,” said Challenger.

“That said, the majority of these departures were under unremarkable circumstances. Many CEOs retired from their positions after a long tenure, leaving the company in relatively good shape. Others left because their skills were in demand and they were offered new opportunities. Still more found the tremendous advances in technology and shifts in consumer behavior called for new leadership,” he added.

Companies are increasingly turning to outsider CEOs to replace their exiting leaders. In 2019, 784 replacement chief executives came from outside the company and 620 were internal replacements. This is the first time external replacements outpaced internal since 2013.

The Government/Non-Profit sector leads all industries in CEO turnover with 339. That is 22.8% more than the 276 chief executives who left their positions the previous year. These companies include government agencies, tourism and transportation authorities, Chambers of Commerce, education companies, charities, and foundations.

The Technology sector follows with 216 CEO changes, up 42% from the 152 announced in 2018. Financial companies have announced the third-highest number of CEO changes with 129, down 16% from the 154 Financial sector CEOs who left in 2018.

Hospitals announced 121 CEO changes last year, down 12.9% from the 139 who left their posts through the same period the year prior.

Eleven chief executives from the budding cannabis industry left their posts in 2019, the first year Challenger tracked the industry.

Fifteen chief executives left their posts amid allegations of professional misconduct last year and 20 left amid scandal, typically under investigations for financial wrongdoing or other legal issues. Another 24 saw their positions terminated.

Companies appear to be keeping their institutional knowledge intact, in some cases for a limited consulting period. The majority of CEOs (583) stepped down into other roles within their companies, typically to assist in the transition as a consultant, into another C-level position, or into a Board Member or Chairperson role.

Another 395 retired, while 154 found new positions in other companies. An additional 138 CEOs resigned, while 122 left with no official reason given. Thirty-nine CEOs left amid a merger or acquisition. Another eight left amid financial trouble and three left due to bankruptcy.

Most CEO departures on record via @CNBC https://t.co/L449qrk1vM

When unemployment is at a 50-yr low, you expect employers will have to start paying more. There is evidence that they are running into labor shortages, but wages have been really slow to climb.-@AndyChallengeHR talks #layoffs & the #economy @BNNBloomberg. https://t.co/h3g4TF0lzs