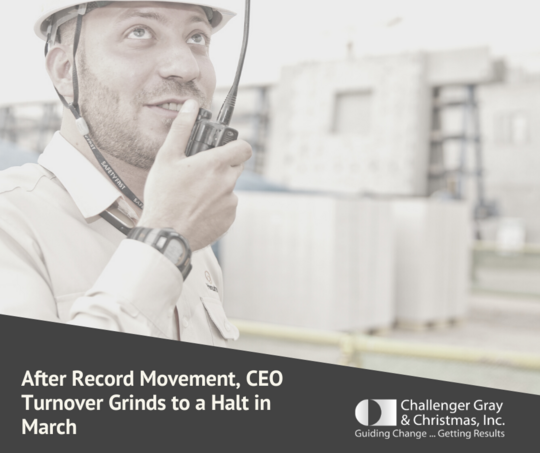 Using SEC filings, news reports, and company announcements, Challenger tracks CEO changes each month from U.S.-based companies that have been in business for at least two years and employ a minimum of ten employees. So far this year, Challenger has tracked CEO exits from 16 Fortune 1000 companies.

March’s total was led by Hospitals, which saw 13 chief executive exits, for a total of 43 this year. That is 105% higher than the 21 CEOs who left their posts in this sector during the same period last year.

“CEOs of Hospitals and Hospital systems are truly being tested right now. Many are losing money due to the need to cancel elective procedures that typically propel these entities into the black at a time when cost-cutting would only hurt communities, patients, and health professionals,” said Challenger.

Companies in Entertainment/Leisure have been hit the hardest by the COVID-19 outbreak thus far. According to Challenger tracking, of the 141,844 job cuts announced due to COVID-19, 83,234 were at companies in this sector. This sector has seen 28 CEO exits this year, up 87% from the 15 who left their posts in the first quarter of 2019.

The Technology sector followed with seven exits in March, for a year-to-date total of 58, 71% higher than the 34 who left their posts in the first quarter last year.

The majority of CEOs (105) stepped down into other roles in their company this year, either permanently as a Board Member or other C-Suite-level position or in an advisory role. Another 96 retired, while 67 resigned.

Of the 392 replacements Challenger tracked this year, 209 came from outside the company, while 183 were internal candidates. So far this year, 24% of replacement CEOs are women.