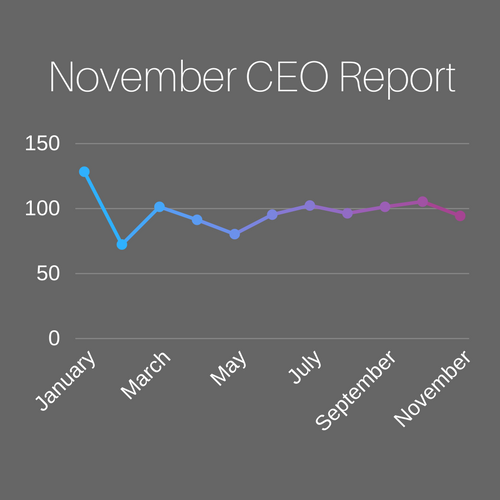 November’s total was 11.3 percent lower than the same month last year, when 106 CEOs announced their exits.

Challenger has now tracked 1,065 CEO changes so far this year, 7.3 percent lower than the 1,149 exits announced through the same period last year. This is the lowest 11-month total since 2004, when just 607 CEO changes were tracked.

The government/non-profit sector continues to lead all sectors in announced departures, with 173 exits, 15 of which occurred in November. This is down 11.3 percent from last year, when 195 exits were announced.

A majority of CEOs (328) have stepped down from their positions into either a board seat or another C-Level position. A total of 33 CEOs announced plans to retire last month, bringing the total to 288 exits for this reason. Another 160 CEOs resigned so far this year, and 73 found new positions in other companies.

“We may see a small uptick in CEO changes as the year comes to a close and companies determine priorities for next year,” said Challenger. “However, we’re more likely to see a large increase in CEO exits if and when companies get more clarity on upcoming legislation.”