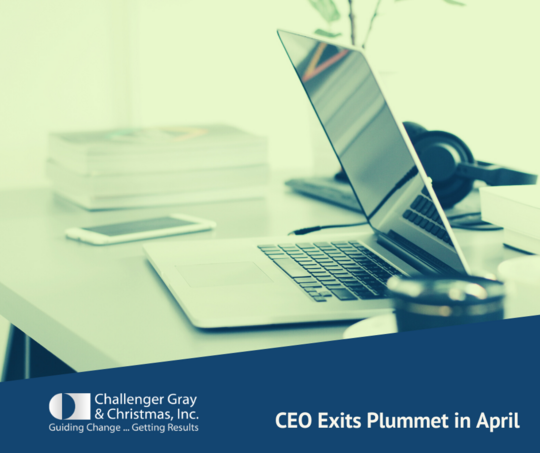 “The Tech sector is not immune to the current crisis, but it does continue to see strong hiring prospects, especially for the more established companies. Start-ups are having a more difficult time securing funding, and new leadership may be needed during this uncertain time,” said Challenger.

Another six CEOs left Government/Non-Profit entities in April for a total of 78 in 2020. These include charities, foundations, and government-run entities such as transportation authorities or public education. That is 32% lower than the 114 CEO exits recorded in this sector through April last year.

“The damage COVID-19 is doing to the economy has begun to spread beyond the initial shock due to the shutdowns. We’ll likely see a second wave of layoffs, but it is far from certain how the economy will react. Companies appear to be holding on to their leaders right now to weather the current storm, at least for the short term,” said Challenger.

While CEOs are retaining their jobs, many high-profile CEOs are reportedly taking no or reduced salaries during this time. These include the leaders of Airbnb, which recently announced it would lay off 1,900 workers. The CEOs of General Electric and GE Aviation also took reduced pay amid furloughs and layoffs.

“This move is largely symbolic, but is an effort to show solidarity with rank-and-file employees who may be currently furloughed or laid off,” said Challenger.