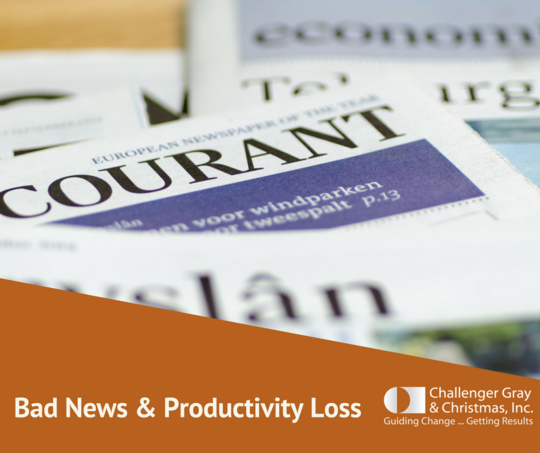 The House will vote on an immigration reform bill today that, according to House Speaker Paul Ryan, will include a pathway to citizenship for recipients of the Deferred Action for Childhood Arrivals (DACA) Act as well as provide funding for new detention centers and the border wall. Opponents believe the bill will not definitively end family separations or solve the issues surrounding DACA. Regardless, the past week’s headlines on the immigration policies of the Trump Administration, especially those that separate children from their families, are dominating the news cycle and likely many workplace conversations.

“Americans have been inundated with polarizing news for over two years, including manipulative and inaccurate news that proliferated on social media during the most recent presidential campaign. Even with a - by most accounts - healthy economy, it’s unlikely all these messages, many of which are specifically designed to divide us, are not impacting to some extent the emotional well-being and, potentially, productivity of many workers,” said Andrew Challenger, Vice President of global outplacement and executive coaching firm Challenger, Gray & Christmas, Inc.

“The most recent immigration stories, replete with images and audio of children crying for their parents, is especially distressing,” added Challenger.

According to an analysis by Challenger, difficult news that impacts the nation, much like recent stories on immigration policy, could cost employers $832.5 million for every 19.2 minutes workers spend discussing and reading about it at work. If a particularly powerful story is in the news for a week, that figure could reach $4.2 billion.

Challenger arrived at its findings by using data from the most recent American Time Use Survey from the Bureau of Labor Statistics. In a typical day, employed Americans spend .22 hours on organizational, civic, and religious activities and another .1 hours on email and mail. With this benchmark, Challenger estimated Americans spend at least 19.2 minutes per day reading news and headlines.

A study by Nielsen on news consumption published in 2016 found that 169 million Americans read the news either through print, online, or mobile means. Applying the employment-population ratio to this group, 96.6 million American workers read the news. With the average hourly wage at $26.92 in May, employers could lose $832.5 million for every 19.2 minutes workers spend on negative news.

A 2014 study by the Université de Montréal found that when a person reads a negative news story, the body produces higher levels of the stress hormone cortisol. This was especially true for women, who had higher stress levels after reading negative news and could remember details from the stories better than their male counterparts.

“Stressors, and especially sleep loss, absolutely impact the performance of a workforce. As workers consume their social media feeds and all the potentially divisive or upsetting news on politics, natural disasters, or violence in schools, workers’ stress levels will likely increase. It doesn’t help that our brains naturally pay more attention to negative news in the first place,” said Challenger.

Known as “negativity bias,” researchers believe humans are wired to pay attention to information that is scary or unsettling, as our survival depends on avoiding harm.

“One way to counteract this effect is to engage in activities that are enjoyable, especially with people you respect and admire. Employers can foster a sense of community through shared meals, like bringing in breakfast or lunch or perhaps playing board games during breaks,” suggested Challenger.

“Another way to avoid news-induced productivity loss is to avoid news that may be misleading or purposefully polarizing. This may mean avoiding or limiting time on social media feeds,” said Challenger.

The spread of false information on Facebook, discovered during the presidential election after ads originating in Russia designed to sway U.S. voters reached millions of users, has led the tech giant to eliminate its “Trending Topics” feature as well as implement other safeguards to protect users from fake or misleading ads. Meanwhile, Apple is implementing an app to show users how much time they spend on their screens.