CEO Exits Up Slightly in October to 105 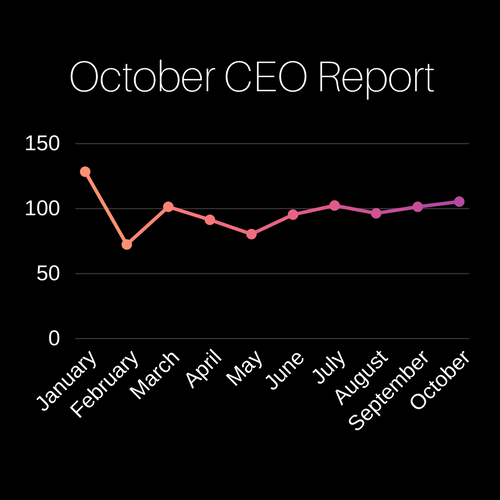 The number of Chief Executive Officers leaving their posts at U.S.-based companies rose 3.8 percent in October to 105, compared to 101 in September, according to a report released Wednesday by global outplacement consultancy and executive coaching firm Challenger, Gray & Christmas, Inc.

The October total was 5.7 percent higher than the same month last year, when 99 CEOs announced their exits.

Challenger has now tracked 971 CEO changes so far this year, 6.9 percent lower than the 1,043 exits announced through the same period last year.

“The job market continues to show signs of strength, with consumer spending expected to be high as we end the year and proposed tax legislation lowering corporate taxes considerably,” said John Challenger, Chief Executive Officer of Challenger, Gray & Christmas, Inc. “Companies have good reason to hold on to their current leaders.”

CEO exits are led by the government/non-profit sector, with 158 announced departures so far this year, 24 of which occurred in October. This is an 11.2 percent decrease from last year, when 178 exits were announced in this industry.

Financial companies and hospitals had the second highest number of CEO exits in October, with 11 each. Both industries have seen significantly fewer CEO changes through October than through the same period last year. Financial firms announced 88 departures so far this year, a 32.8 percent decrease from the 131 exits last year. Hospitals have seen a nearly 37 percent drop, with 92 CEOs leaving their posts this year compared to 126 through this point last year.

The services industry announced 98 departures so far this year, up 172 percent from last year, when the ten-month total was 36.

California recorded the most exits this year, with 121, 15 in October. Texas follows with 91 departures this year. New York announced 59 CEO changes through October.

Most (305) CEOs have stepped down into other roles, usually a board seat or other C-Level position. Another 255 CEOs retired, while 151 have resigned. Sixty-nine CEOs found new positions in other companies.