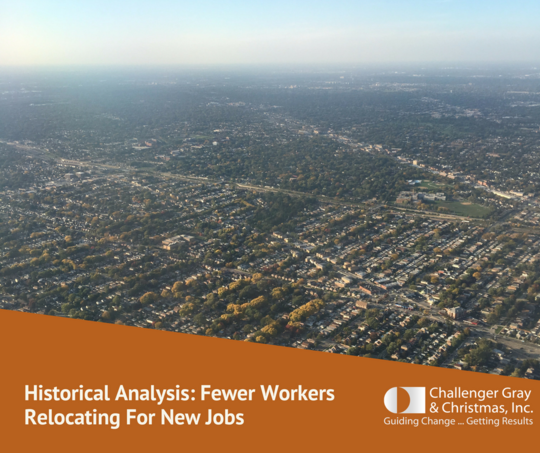 The Challenger data is based on a survey of approximately 1,000 job seekers who successfully found employment each quarter.

“The dot-com bubble that left companies flush with cash in the second half of the 1990s, allowing them the potential to offer generous relocation packages to attract talent, burst in 2000. That burst led to an increase in job cuts nationwide, and this period seems to delineate the end of the relocation trend. As companies found themselves in cost-cutting mode, it seems many chose to find local candidates and spare the expense of relocation reimbursement in the years following,” said Andrew Challenger, Vice President of Challenger, Gray & Christmas, Inc.

“The one-fifth to one-quarter of workers who were moving to find positions in the late 1990s is nothing compared to what we saw in the mid-to-late 1980s, when nearly one-third of workers were moving for new positions. Much of that movement could be attributed to economic recovery policies after the 1982 recession,” said Challenger.

The current relocation rate of 10 percent is 72 percent lower than in the mid-to-late 1980s. The average annual relocation rate from 1986 (the first year of Challenger tracking) to 1990 was 35.2 percent.

After a deep recession in 1982, the economy sustained the longest period of growth since WWII between 1983 and 1987. Housing prices rebounded, allowing people to sell and potentially relocate for better positions.

“We saw something similar in 2009, when housing prices began to rise after the Great Recession and the annual relocation rate hit 13 percent,” said Challenger.

Now, other reasons could explain the falling relocation rate, according to Challenger.

“There is a lot of risk involved in picking up your life and moving to another area. Especially now, in such a tight labor market where jobs are plentiful, job seekers don’t have to leave the security of their homes to find new employment,” said Challenger.

“Meanwhile, technology has made it so that workers can work from virtually anywhere. Even workers who are offered relocation packages may forego the hassle if they and their employers agree their jobs can be done remotely.

“This expansion in technology has also allowed companies to grow exponentially, giving opportunities to workers across the country. Over the years, in many cases, companies have found it more beneficial to go to where the workers – and favorable business conditions - already exist rather than have talent come to them,” he added. 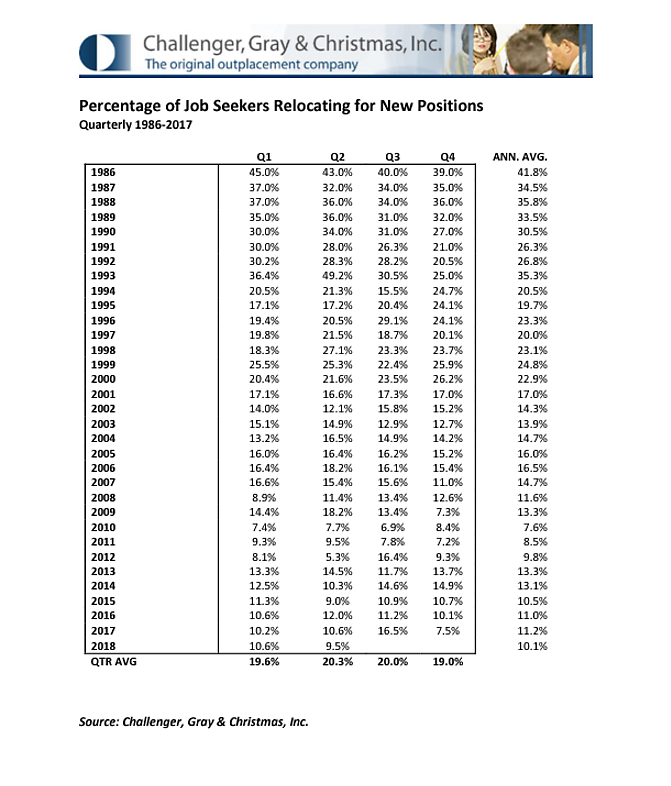