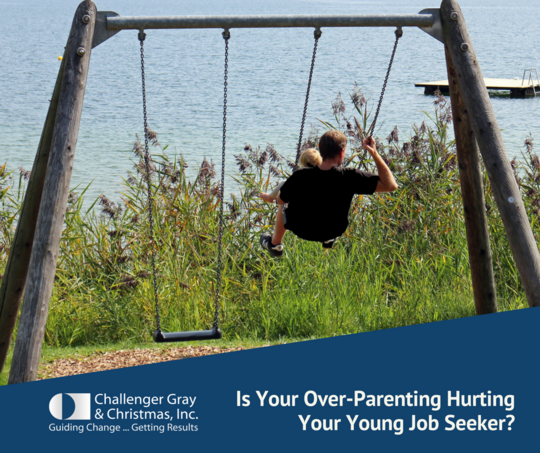 With the new school year just beginning, parents everywhere have new and returning concerns for their children. While every good parent wants their child to succeed, many are willing to do whatever it takes to help, which could impact their children’s resourcefulness in the workplace, according to one workplace authority.

“Sometimes, well-intentioned parents go a bit too far, micromanaging homework assignments or interfering in their children’s interpersonal relationships. Parents who get too involved in their children’s lives, to a point where it borders on controlling, are called ‘helicopter parents,’ and may hinder their teen’s or young adult’s ability to trust their own judgment and perform in a work setting,” said Andrew Challenger, Vice President of global outplacement and executive coaching firm Challenger, Gray & Christmas, Inc.

In a 2013 report by CNN, a recruiter was planning to hire a candidate until the candidate’s mother got involved. After reaching out to the recruiter individually to ask questions about her child’s potential role, the meddling lost the candidate, who was otherwise qualified, the position.

According to a 2007 study by Michigan State University, 23 percent of companies reported that parents were involved “sometimes” to “very often” when in the hiring process of college seniors. Of those parents, while very few (4 percent) attended interviews, other involvement included obtaining information on the company (40 percent), promoting their son or daughter for the position (26 percent), and complaining if their child did not get the position (15 percent).

This problem is exacerbated by the suite of instant communication technology that allows parents to be in contact with their children virtually at all times.

“Employers need people who can think for themselves, make strong decisions without hesitation, and work independently. When a candidate’s parent makes an appearance, whether through talking to the hiring manager, showing up to an interview, or even hanging around the parking lot, it indicates that the job seeker may not be mature enough to handle the rigors of the job,” said Challenger.

“Parental over-involvement could show that the candidate is not seriously interested in the role. When a candidate does not personally advocate for themselves, it gives the appearance that this person does not care,” he added.

In fact, of the companies that reported parental involvement in the Michigan State study, 31 percent experienced parents submitting resumes and 12 percent saw parents make interview arrangements for their children. According to a 2016 OfficeTeam survey, this involvement does not impress employers. Thirty-five percent said job seekers should handle things on their own, while another 34 percent would not recommend parental involvement.

“Helicopter parenting, especially when it extends to the workplace, impacts the credibility of the candidate. Professionals need to be accountable for their own work and mistakes. When parents get involved, they make it seem as if the child is not capable of succeeding independently,” said Challenger.

There are some things that parents can do to help their children with job searches that will not hurt their children’s chances of getting a job, according to Challenger.

The best way to find a job is through networking. Let your contacts know your child is looking for work, but let your child advocate their abilities for themselves. Give your child’s contact information to those interested, but leave the arrangements to them. While you should not directly apply for jobs for your children, helping find open jobs on job boards or through your network could be very beneficial. Looking for jobs is stressful and time consuming. Acknowledge that and allow them to share their frustrations during this process. Offer advice, but limit unhelpful or unconstructive criticism. Recruiters receive on average anywhere from 100-250 resumes per open position. A job seeker is not going to get an offer for every job for which they apply. Failure is an important teacher, especially when it comes to the job search. Let your child learn from their experiences. By the time your child reaches adulthood, you have given them all the tools you can for them to make decisions that are best for their lives.